Monika Hazelwood has not received any gifts yet

I have started to knit with this 100 % Lion's Brand FISHERMAN'S WOOL now and by using 5.5mm knitting needles as the label recommends for 16 sts per 10cm

I hope this is ok. My goal is to finish 36 squares by the end of January. I am on my 9.th square now. But I could always just use it for another local…

I copy for you Christine Johnson' pattern to knit a diagonal/striped square . It works. I just knitted my first not too long ago - a month - following her instructions:

[It isn't imperative to slip the first stitch of every row - it works if you don't but that's just how I do it.]

This is a perfect diagonal/striped square!!!! 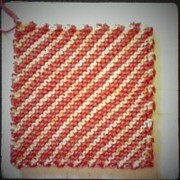 Thanks for your kind words about my squares. Which pattern are you asking for? All came from Member's Patterns - Squares . They are many in there. Let me know which one you are looking for.

Happy Birthday. I hope you have a lovely day.  :))

hi Monika ..thanks for your friendship offer...nice to know you :-))

Hi Monika. The Wendy square is not in the KAS Pattern Book. If you click on the Forum page on the Home page you'll find the Discussion Forum with all kinds of subjects. If you scroll down about half way down the page you'll see Members Patterns. This is for our patterns that are not in the official pattern book. Click on the title and you'll find a page with 4 different categories of pattern. Click on mMembers squares and go to page 4. Near the bottom of the page is Wendy's pattern with a photo in a deep reddish-pink colour.

If you get lost, just remember the pattern is very basic. You need to cast on a multiple of 4 stitches + 2, depending on the type of wool and size needles, this is about 30 or 34.

It's a very easy pattern, but very effective.

Hi Monika, I am so sorry about my late response, but some how your comment on my page slipped through the cracks and I only saw it now. There are different ways to join the squares together. I think the majority are sewn together with a simple blanket stitch. I personally use the following methods: slip stitch or single crochet for knitted squares and a crochet border which connects all the granny squares. I hope this makes sense :)

Hi Monika, for the Diaogonal Squares I also have used this pattern, here is the link:

Hi Monika, here is another link to the R/W Hats for Kareemah: http://forum.knit-a-square.com/forum/topics/red-white-hats-galore-wish-list-challenge-from-ronda

Hi Monika, the "hats for Kareemah"was a very special project, we reached the target of 600 red and white hats, many members took part in this challenge. Here is the link to the (closed) discussion. http://forum.knit-a-square.com/forum/topics/red-white-hat-s-for-kareemah-challenge-progress-tally .