WISDOM FROM OUR GRANDPARENTS - PROVERBS, SUPERSTITIONS and OTHER RULES OF LIFE

My grandmother, Kate, was a 'walking proverb'. She had one for every occasion.

She also had little superstitions, that guided her behaviour, and to this day some of them have stuck with me.

Other things she said were neither proverbs or superstitions, just sayings she used each time a particular situation would arise and she wanted to make a point.

Since we are such a wide-spread KASfamily, I wonder if 'wisdom' like this is universal, or if each country has its own versions.

Let's share our grandparents' wisdom sayings to see what we can come up with and have some fun.

Please do not list more than one proverb, one superstion and one saying per post so that we all have a chance to 'digest' them.

My grandmother said the same thing , " ... just in case you end up in the hospital "

PROVERB:    poverty is the mother of invention

SUPERSTITION:  itchy palm?  Rub it on something brass - money is coming.

SAYING:   the hurrier I go, the behinder I get.

Anne, my Grandma used to say the same thing, except with one word change.  She'd say "The faster I go, the behinder I get"

I had only one Grandmother that I saw often ... my Dad's mother.  Dad's father passed away before I was born.  My Mother's parents lived so far away that we only saw them a couple of times a year.  Most sayings I recall come from my Dad.  May I share one of his?

He was bald ... was from about age 20.  Whenever anyone commented on is lack of hair, he would simply say, "Grass won't go on a busy street."

Would you believe that for a few years, we had both grandmothers living on the second floor of our house? At the time they were both very old (I was an 'afterthought' so I never knew them in their younger days)

The quotes I will use here are from guess who? If my paternal grandmother quoted a proverb, it was the 'real thing', straight from the Book. She didn't believe in superstitions and was far too proper to use common sayings.

I'm not sure how my mother survived all of this. When they were both with us, they referred to one another as Mrs. _, never a first name, not once.

They got along well enough but loved to tell tales on one another. Dad's mother was an invalid and mostly stayed in her room. My other grandma would stand at the top of the stairs right outside the other's room and holler at my Mom "Mrs. _ has been doing laundry in the bathtub again and there's water all over the God-blessed floor". A short while later, my Gram would call down the stairs in lady-like tones, "Kathleen, dear, your mother has passed me the newspaper and it is all mixed up".

It was quite an experience but I wouldn't have missed it for the world.

Regarding throwing salt in the devil's eye, I am never sure which side he stands so I always throw spilled salt over BOTH shoulders - that way I can't miss him!!

Good idea - I think I'll do that too!

Anne, we have something similar about itchy palm, but what about itchy nose? We say " host nebo zlost". It means either a guest will come or you´ll be angry. My granny used to say it quite often but in fact I don´t understand it .Have you got anything similar in English?

Yes we do, Karla.  My grannie would say "If you have an itchy nose, you're going to kiss a fool".  Of course we always had fun deciding who to kiss to cure the itch.

We have a 'thing' about guests dropping in.  I'll post it below.

Saying from my grandmother and my mother:   "A trottin' horse will never see it!"

This could apply to tiny mistakes in our work ... you know, those design elements :) xo

My grandmother had a saying that was perhaps not as kind, but just as true "A blind man would be glad to see it".

My Mum was always saying this, Anne. :)) 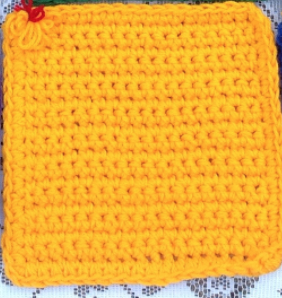