WHAT A FABULOUS MONTH IT HAS BEEN SO FAR FOR KAS IN SOUTH AFRICA !

In order to give you an idea of what we are getting up to, we are going to try and submit a report weekly so that you too can experience a week in the life of a KAS volunteer in South Africa (SA).  We hope you enjoy our stories.

June kicked off with a little more support than usual with Wendy being able to help out a great deal more since she resigned to start up her own business.  We wish her all the very best and look forward to her input at KAS.

I am still driving around with a grin from ear to ear in my new KASvan and I am so excited about the challenge to fill it with squares – a target it would seem you will reach sooner rather than later.  The visibility of the KASvan and the website paid off last week when we had a visit from a lady called Lynette, representing a church in Norwood in SA.  She had been trying to get in touch with me for months to hand over 4 enormous boxes of the brightest and most beautiful squares they knitted.  She eventually tracked me down when she read the number printed on the KASvan on one of the photos on Facebook.  Isn’t it amazing – thanks for persevering Lynette!  We are working on an a South African page on the website with contact details for us in SA so people do not battle to get in touch in future.

We have had 2 opening days this month with the third starting in a short while and we have lots of mail to get through.  Some of our regular volunteers are away so we are down to a trusty few at the moment.   We love receiving you wonderful contributions and the notes you send us.  We have been particularly pleased to be receiving many squares, which as you know, is our biggest need.

A great deal of this month has been taken up with meetings and research on how to improve the way in which KAS operates in South Africa and I am thrilled to report that we have some wonderful plans in the pipeline.  We will share these all with you as and when we have progressed them, but knit and crochet away because very soon we will be warming more orphaned and vulnerable children than ever.

On Saturday, 15 June, Wendy, Abegail and Zodwa joined me on a distribution with a difference in an informal settlement called Zenzele just outside an area called Randfontein.  Wendy and I headed out in the KASvan with Abegail and Zodwa in convoy for an hour’s journey to our destination.  We were thrilled that the GPS took us to the exact spot we needed to be – these places are not well documented.  An entire day’s activities had been planned by Debbie and her team from GOMA (Grace Outreach Ministries of Africa).  Grace is a massive Pentecostal Church in Africa that works tirelessly amongst poor communities.   The children had their faces painted, played on a jumping castle, enjoyed skits put on by the church, danced, sang and generally escaped from  the dreary reality of their lives for a few hours.  The ladies of the community all crammed into a class room at the church and sang gospel music at the top of their voices while sewing together KAS blankets and enjoying a cup of tea and biscuits.  Wendy, Abegail, Zodwa and I decided not to try our talents at rapping with the children and joined the ladies sewing blankets instead. 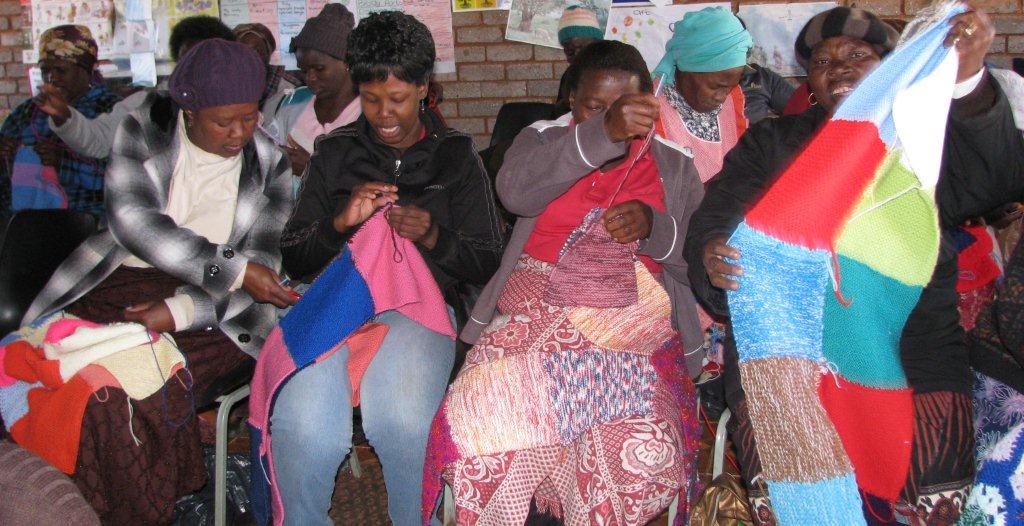 The ladies helping sew together blankets for children in their community.

At lunch time we enjoyed some hearty soup which was well received because there was an icy wind blowing.

Later in the afternoon we distributed 100 blankets and beanies to the children.  Pastor Thomas called up each of the families and gave them food parcels arranged by GOMA and I got to do what I love more than anything, wrap children in your love with warm blankets. 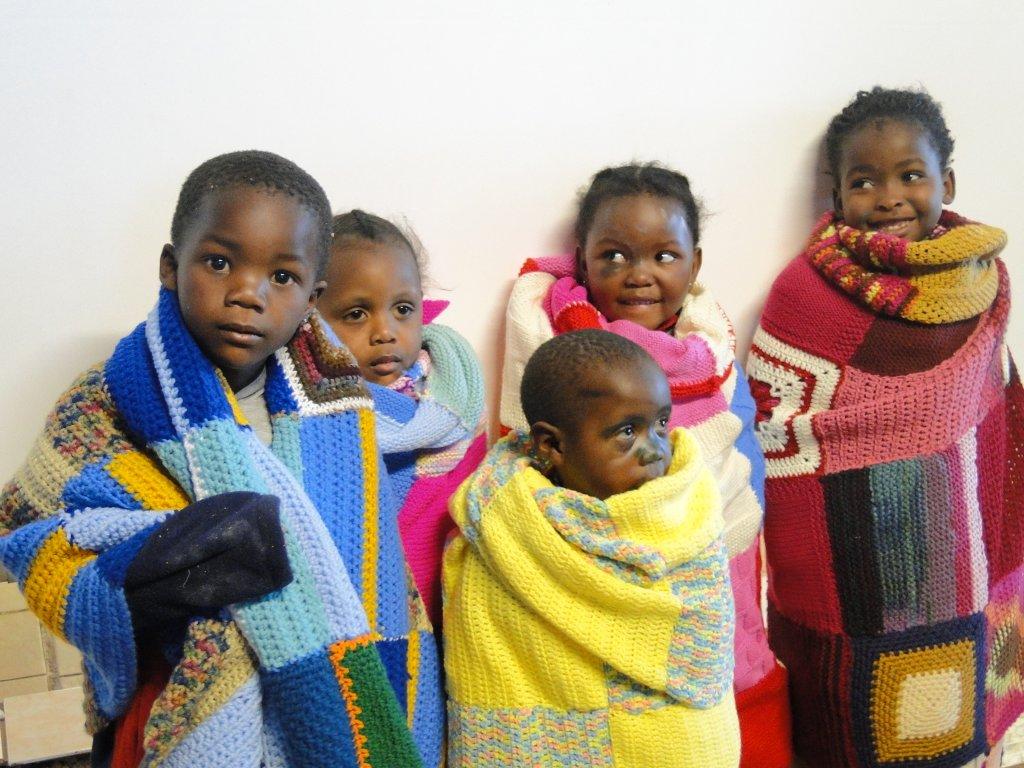 The children warmly wrapped up in their colourful blankets.

It was a tiring day, and the bitter wind resulted in dry and very chapped lips, but our hearts were warm.

Sunday and Monday were public holidays in South Africa.  Youth Day was celebrated across the country on Sunday and was an opportunity to reflect all that this amazing country has been through over the years.  As I am sure you are aware, Nelson Mandela – “Madiba” – has been very ill of late and is hospitalised in Pretoria with a lung infection.  He appears to be responding to treatment, and he is in our prayers.  Many KAS contributors have enquired about how people in SA are feeling about Madiba being so ill.  Well, everyone is sad, he is “The Father of the Nation”, but we also realise that his life is in the hands of God, and should he be needed elsewhere now we will be distraught as a nation, but we need to let go too.

On Tuesday, 18 June we headed off to an area called Diepsloot which is a massive informal settlement north of Johannesburg.  This too was a distribution with a difference.  G4S wanted to donate some sporting equipment to the Vuselela Drop-In Centre.  Sr Sato and Sr Eunice have been managing this centre for a number of years now and treat people in the community who have been affected by or infected with HIV AIDS.  On any average afternoon, they can have as many as 400 children at the centre and the table tennis table, volley ball nets and cricket sets were well received.  Staff from G4S challenged Sr Sato to a table tennis match and she never turns down a challenge.  There was a great deal of fun and laugher.  KAS was also able to give Sr Sato bags of bundled blanket packs, wool and needles, for the women and men who visit the centre to sew together.  It is extremely important for them to have something constructive to do. 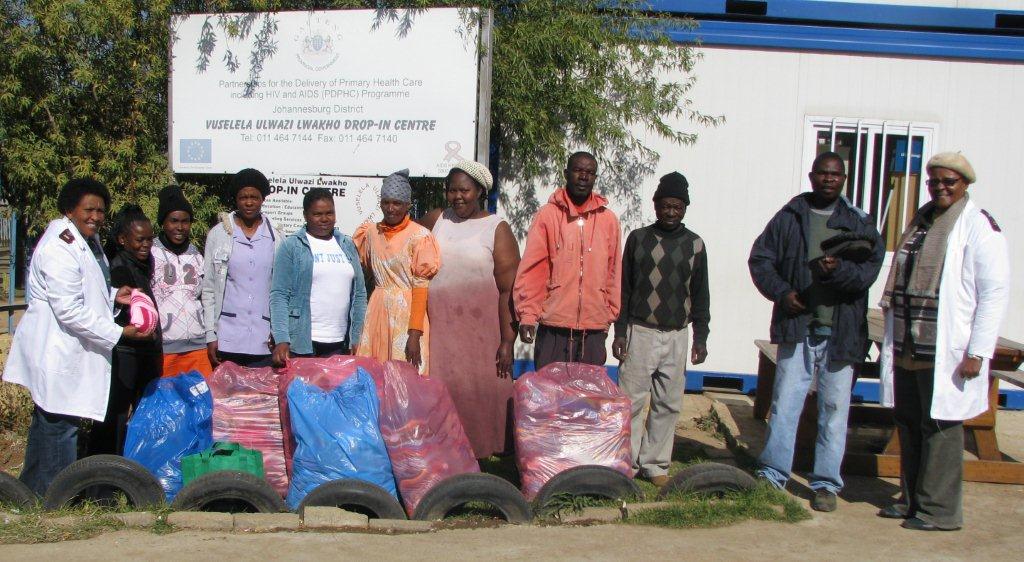 Sr Sato and Sr Eunice with visitors to the centre who will sew together blankets from KAS.

Otherwise I have completed the May books for KAS and we are slowly attending to the pile of thank you letters.  We have made up 270 blanket packs so far this month and have packed boxes to send to projects we support in Ladysmith and Cape Town as well as an orphanage in Durban.

Well, we must tackle the mountain of mail that is here and John from Hotel Hope has just arrived with a truck load more mail, so best we get going.  We will chat again next week.

Hello very dear Helen ... everyone's warm response to the report has been so encouraging !  We think of you all SO often and with much affection. What a wonderful vehicle of friendship KAS has been, across continents and time zones and cultures - it's really quite amazing and most heartwarming !!  xoxoxoxo

You have so captured the essence of the work on the ground in South Africa, Ronds, it is as if we can all be there with you in the KasVan distributing the blankets.   And it is certainly inspiring to everyone's knitting and crochet hands it would seem too.

For those of you wanting to remind your self of a former visit Ronda made to Sisters Sato and Eunice and Vuselela and the remarkable work they do, you might want to revisit this Square Circle Ezine.

Thanks for the link to the previous Square Circle Ezine, Sands ... yes, Sister Cecilia Sato has been a friend of KAS for such a long time and we always get a marvellous, warm welcome from her whenever we visit.  The table-tennis table, balls and bats and the cricket sets and volleyball kit, all donated by G4S, were a great hit and we believe it is a matter of time only before we have some champions in those three sports, emerging from deepest Diepsloot !! Just having the opportunity to TRY, is all it takes. We will keep you posted ....

I must say I clicked on this link and got "No Such URL" so is there another way to access it?  I tried several times same result.  :(

So delighted that everyone enjoyed reading this - thank you so much for your invariably enthusiastic response !!  Lots more where this came from and it's so encouraging that you all are so interested in what happens here in SA.  So actually, I am thanking YOU - wonderful supportive KAS members and contributors - and sending hugs to all.  xoxoxoxoxo

Hugs and high fives right back to you Ronda.  I just love hearing about the children and the Go-Go's and the projects ongoing and the sewing groups and what companies are doing.  We are learning so much about the life and culture there and the wonderful people.  There is much to love about South Africa...much, and because we have come to love the kids so much and care for them so deeply and by extension the entire country, we are definitely interested in anything you can find time to share with us.  That is what is amazing to me, that you DO find time to share with us.  Thank you so much for this update.  And I must add that Pam Antink does an amazing job of supplying us with lots of photos of distributions too.  Coming to this online site is often the highlight of my day!

The highlight of my day too, Jeanne. :))