Ronda writes: “The first Knit-a-Square distribution was at Phiri Parish Centre on 29th March 2009. Our daughter, Erin, who is still on the board of Knit-a-Square, was there with her two children, Daniel and Hannah, who are teenagers now!”

“These were three such sad little people - I do so often think of them and wonder where they are and how they are doing.” 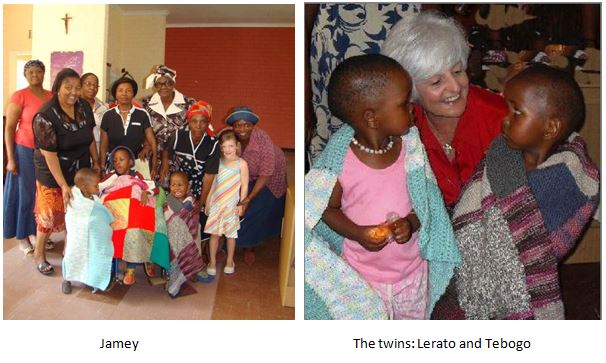 Ronda writes: “This was a significant distribution in a tiny Methodist church in Protea South, which was a very poor informal settlement in those days. It has been largely re-settled now, and those who refused to move were marginally upgraded so the surroundings are less depressing than they were back then.”

“You will see from the photo that people literally lived in tin or boarding shacks, with no bathroom facilities, nor even communal ablution blocks ... any old bucket will have to do!” 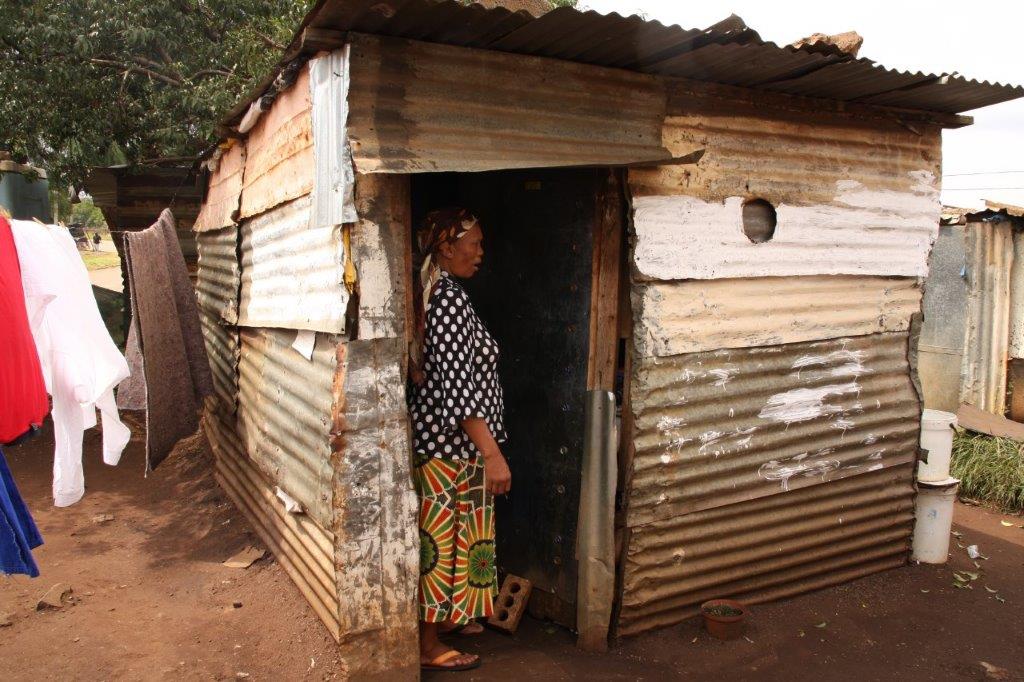 “The huge significance of this, however, is that this is the day we met WANDI!!  This was her local church in those days and she fell in love with KAS immediately, joined us and we couldn't have managed without her from that moment!!” 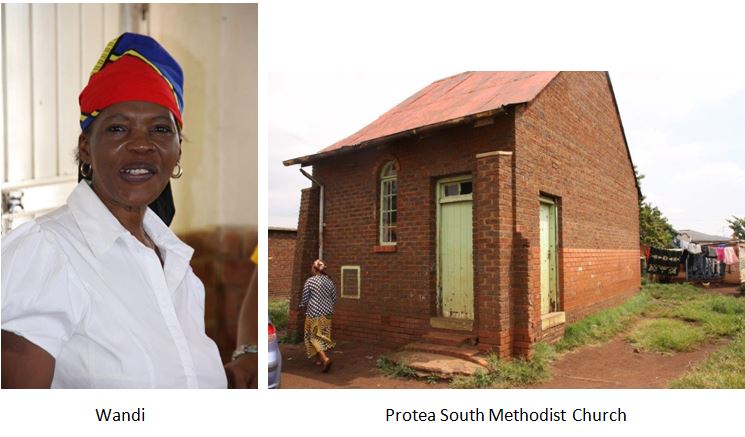 “On this occasion, we found that half the neighbourhood gathered around when they realised there was a celebration of sorts going on ... so we had to improvise and hand out ONE BLANKET PER FAMILY, rather than one blanket each. Amazingly they were received in good spirits and we returned later on to distribute many more blankets, so that all the children could be catered for in the end.”

Ronda, together with her daughter Erin Van der Vyver, Lindiwe Ngwenya and Wandile Mkhwanazi, who have become permanent volunteers, began the tireless work that continues today.

They opened the parcels, recorded where the squares had been sent from, packaged them into 35 square bundles, and organized for a variety of communities, including the Gogos (grandmothers), to sew them into blankets.

Lindi and Wandi identified scores of small day care centres in the shack settlements, put together by enterprising women to look after the children.  Most of the finished blankets, together with hats and toys are distributed to the small children in these centres.

People around the world, greatly moved by the issue, offered to help in many ways.  One such suggestion to assist in handling the volume of enquiries as a result of the response to the Lion Brand story, led to Sandy establishing the Square Circle moderated forum in May 2009.

The aim of the forum soon became to support and nurture the growing community.  Members were and continue to be encouraged and assisted to develop ideas that challenge, excite and inspire new and existing members’ ongoing contributions.   These include squares, hand warmers, hats and toys.

Membership continues to grow today under the hard-working administration of a band of dedicated moderators worldwide.

In the early years, working full time as volunteers, Sandy’s and Roger's focus became twofold: firstly; to support and build on this community and secondly; to raise awareness of the plight of the children.

The McDonald daughters Kalai and Cressida joined in 2009 to help implement strategies online to build the community, establishing the Facebook group and developing the KasKidsTM schools' program.

This program had the capacity to put the issue in front of hundreds of thousands of school children and their families globally as well as introducing them to Knit-a-square.  It is estimated that the program has been introduced to 750 schools worldwide. 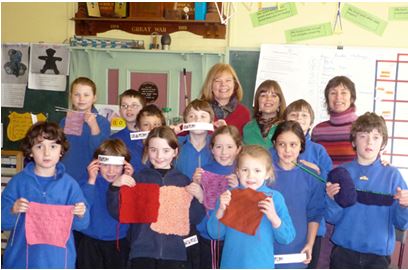 Ronda continued to build on her church and community networks to keep on wrapping blankets around children. Each time she and her volunteers wrap a blanket around a child, they tell them they are special and have a unique role to play in their country.

A picture tells a thousand words

As these efforts had to be communicated to the members, Ronda took thousands of photographs of the children and their blankets, the volunteers and the shack settlements, often captioned to tell the story of this remarkable work on the ground in South Africa. The stories together with the often-exquisite work done by the stitchers were assembled into newsletters and distributed first by Sandy as the Square Circle ezine and later by Pam Antink as KasSnippets. These newsletters have kept the community informed of the results of their work and of the gatherings of groups of people all over the world who contribute to this cause.

The decision to become a charity

It soon became clear that funding would be required to ensure support for at least the South African operation, so the decision was made to incorporate Knit-a-square under the name KasCare. It became a registered charity in Australia in September 2009.

In Easter 2010, the family gathered in South Africa for a reunion.

It was apparent that Ronda was in need of urgent support and resources to sustain the massive volunteer effort she was managing as the yarn contributions continued to pour in.  The first appeal was sent in April 2010.

We hope you enjoyed the first installment in our series. Each month we will be exploring more aspects of Knit-a-Square.

As we celebrate we hope you will join us with your needles, hooks and yarn.  But also pause for a moment to thank Ronda and Sandy for their dedication and inspiration in finding a way to warm the children of South Africa. They weren't happy to just talk about changing things for the children; they were willing to set the change in motion.

What a beautiful "good news" story.

Thank you to Ronda, Sandy, Roger, and families for sharing your vision of hope for the children, and for allowing crafters from around the world to join with you in becoming a part of the solution.

Indeed ! Ronda its a privilege to be part of KAS from afar. Thank you for not thinking, its too big, or too much or I can't make a difference.

Thank you Ronda, Sandy and your families for creating this opportunity for thousands of crafters around the world and for the love and care you share with the children on behalf of said dedicated, caring crafters.

Ronda, your stamina in continuing this 'drive' to share the love and warmth with 'our' children is nothing short of amazing and I thank you from the bottom of my heart. Your love for the children knows no bounds. xo

It takes special people to do extraordinary things to help improve the lives of so many people. Thank you

I'm proud to be part of this story and will never cease to admire Ronda and her family for creating an association that permits people all over the world to come to the aid of these vulnerable children. So much has been done in 10 years, but s much more needs to still be done.

THANK YOU Ronda, Sandy , Lion Brand , Wandi and Lindi and all the other pioneers of KAS.

Little did I think, when I sent off my first squares in 2009, that we would be celebrating our 10th anniversary of waming children. Kudos to Ronda and Sandy for "setting a change in motion" by inspiring so many knitters around the world, kudos to all the folks who have sent squares over the years and helped support KAS financially, and kudos to all the folks we will meet in future chapters of our story as it unfolds over the next few months, who have helped build KAS to where it is today.

Do we know how many blankets we have distributed since 2009? That would be an interesting figure to see. We are truly changing the world, one square at a time.

So interesting!Thank you all for this wonderful organisation!

Permalink Reply by Deborah Anderson Fleming on February 2, 2018 at 5:19am

Congratulations KAS for your consistent dedication. Thank you all for the opportunity to give love thru the work of our hands. We are not able to wrap our arms around the children, dry their tears, or tell them they are so special but you are there doing that for us. Thank you for being there.

Thank you for this clear report on the beginnings.  I was moved by Sandy and Ronda's story when i searched for knit a square. I was surprised when I joined in 2011 that such a powerful way to warm a child has been going for such a short time, and the momentum it gained along the way.

Ten years coming up. I still marvel at the way Wool-Girl came alive to help me on Ronda's birthday. What a journey it has been for me to to tease out the yarn from hundreds of hidden places in hundreds of cupboards in homes. It has put to 'warm work' many a languishing stash.