Thank you for this report, Leanne. Wonderful, uplifting recounts and pics.  xo

The Knit-a-Square barn was a hive of activity today. I heard two people say, in completely different contexts, "I've never seen it so full!" That's because stock is piling up for the big distribution of 950 blankets in early April and everything has to be photographed, packed and stacked on the shelves before then.

I found Mabel beside a pile of laid-out blankets that reached to her hip and was told that, when she came in this morning, the pile was as high as her shoulder. Now, Mabel is the tallest of all the volunteers so that's a pretty high pile of blankets! Ronda said she had to stand on a chair to take photographs! She called it a "cake", which describes it well. Very pretty it must have been too, with all its layers of colourful blankets!

Estelle said the volunteers packed 260 blankets this morning, 26 bags of 10 blankets each. Meanwhile, Nani and Themba went out to fetch 73 completed blankets from one of the gogo groups. In addition, several completed blankets arrived in parcels from overseas. Among them were two which were knitted  in gorgeous mohair-like yarn, resulting in a wonderful stretchy feel. There was a magnificent "slice of Africa" blanket with fabric appliqués attached, a real work of art. Also, an exquisite crocheted blanket in autumn shades, again with a lovely texture. Just some of the amazing winter warmers which our members have lovingly made for children living in desperate conditions in our country. May each one bring joy and comfort to the child who receives it.

At the long table down the centre of the barn, the sorting of squares, beanies, hand-warmers and toys was also a sight to see. Bongi opened an enormous box from Czechoslovakia that contained 440 squares. Liz worked on a heavy blanket that needed repairing. Athele and Estelle opened bags from the United States, Britain and South Africa containing some great corner-to-corner squares and "plain Janes", ideal for offsetting patterned and themed squares. Lindi, Wandi, Lebo and Viv worked like a production line, building piles of squares in coordinating colours, tying them into bundles and packing them into bags ready for the gogo groups to sew up.

For my part, I paid attention to what the volunteers were saying with a view to passing on some tips:

Firstly, size does matter. We have a standard size for squares which we like to stick to because it makes sorting much easier. Sometimes, a package will arrive with beautifully-constructed squares in dazzling colours that would combine well into a blanket but they differ too much in size to be used together. This frustrates the volunteers who love nothing more than to pull together interesting colour schemes in swift, smooth strokes.

Secondly, there are certain colours we always seem to be looking for. With all the lovely themed squares featuring animals and nature, there is a need for more brown, green, orange, white and black squares to use between them. Also very useful is navy blue, as it doesn't show the dirt and is great in nearly all colour schemes.

Thirdly, we still get lots of parcels without packing slips containing the name of the sender and details of the contents of the parcel. This information is important for keeping records. Sometimes Ronda is interviewed about Knit-a-Square and it is useful to have accurate data available. We are a small team of volunteers but our members populate the globe. People can only get a sense of how impactful the organisation is when they hear how all the knitters, crocheters, group coordinators, fundraisers, donors and supporters join hands to make the work possible.

Thank you again, Leanne!  I love it when your blog appears. You have a way of taking us into the KASbarn to have a quick peek at all the acivity :))

Thank you, too, for the reminder that PJs are always in demand ... xo

Thanks Leanne for keeping us closer to the action in KASbarn. I can knit brown, blue, green PJ's . Again, thanks,

Thank you for the update!  I always look forward to reading about what is going on in the KAS barn.  I'm a beginner level knitter so PJ's are my specialty. :)  Thank you for letting us know the colors that are most needed.  I'll keep these in mind when shopping for yarn.

Thank you so much, Leanne for another wonderful newsy recount from the KASBarn.

I will keep in mind the need for the coloured pjs mentioned. I came across some browns in my stash the other day and thought , 'ugh, that's too dull on its own', but sounds like it could come in handy as a 'contrast' colour after all.  :))

Love reading about the happenings in the KAS Barn, makes me feel almost like I am there. I would love to be present at an opening day (but that isn't possible) so this is the next best thing.

I will certainly try to include some PJ's in requested colours in upcoming parcels too.

Ronda, Viv and Lebo admiring out pile of blankets from the Gogos which has grown considerably since last week. 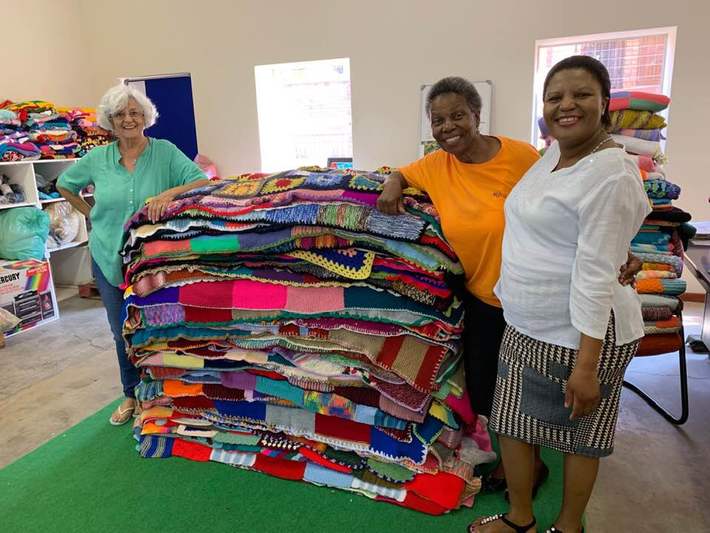 Thanks, Leanne, for another newsy and enjoyable report.

Thank you Leanne for more KASbarn news; the pile of blankets is quite amazing!

Thanks, Leanne, for that update. I read it and was almost there in the barn with you all for once. So interesting. What a fantastic pile of blankets! They look so colourful to see. Good to hear about the colours that are needed in the wools too. Keep on the good work! xx

Thank you so much yet again dear Leanne ... your insights are always interesting to me even though I am IN the KASbarn with you all !  You have a special gift and intuition as to the atmosphere in the Barn and pick up nuances we tend to overlook.  What a great blessing you are to us all !

And thank you to everyone who keeps us going in such a wonderful, generous manner ... indeed you bless us enormously too xoxoxoxoxoxox