Thanks Amy for posting my photos.

Today was my first day at the barn since the start of January as I've been away on holiday. It was good to be back amongst the volunteers. There were a couple of empty gaps at the sorting table but I was glad to see Lindi back on her feet, looking stronger after her spell in hospital.

Ronda reported to me that the anticipated flood of post at the start of the year never actually materialised. After the first week's collection, which comprised all the mail that came in over the Christmas holidays, the last three collections have been quite small. She puts this down to the fact that the entire system slows down at the end of December and takes some time to speed up again. Today's post was a big one, though, costing several thousand rand, and gave everyone lots to do.

Sadly, morale at our local post office is low. Usually,, Ronda says, she gets lots of smiles from the staff and can engage in friendly conversation while she waits for the manifests to be filled in and for Themba to load the van. Yesterday, however, the staff seemed very glum. It's strange, as we haven't heard of any trouble brewing so maybe it's just a localised sense of gloom. Whatever the case, we hope for the negativity to pass.

An interesting piece of news I heard is that January saw parcels come in from some very unusual places. For the first time ever, we received squares from Bahrain and Malta. Squares also arrived from Paraguay, Japan, Sweden and China. Even as I was sitting with Athele today, she found squares that were sent from contributors in Lithuania and Taiwan.

Closer to home, we received a big donation of yarn from a woman whose great-aunt passed away, leaving behind a stash of needles, project bags, wool and acrylic fibre. We generally find homes for the craft equipment among our volunteers and gogos but the yarn is always highly sought after by the co-ordinators of the gogo groups where it is used for sewing up blankets. Among the items in the yarn stash was a very old, unopened weaving kit, complete with frame. It still had its price on it—R1,99, less than the price of a regular postage stamp today!

Some of the items our volunteers unwrapped today were several eye-catching blankets, a batch of identical-sized squares in lovely pastel colours, three cute teddy bears, a very happy-looking Bugs Bunny and jerseys in various sizes. One packet contained dodgy-looking squares with a note. The squares were knitted by the sender's mother who has dementia. We are always touched when such handwork arrives. For one thing, it shows the love of the daughter in carrying out her mother's wish to help Knit-a-Square. For another, it proves the amazing therapy that knitting provides, allowing people to feel productive even when they struggle to cope with other everyday tasks.

Our bulk distribution project is moving ahead well. With 50 bags of 10 blankets each, we have already accumulated 500 of the 950 blankets needed for April's event. If everything goes as smoothly as it is going now, we should reach the target well within schedule.

Thanks, as always, to all you amazing knitters and crocheters who selflessly make and send items for distribution to our vulnerable children in South Africa. As this country reels under wave upon wave of shocking revelations about the corruption and greed of so many government officials, it is comforting to know that goodwill still abounds and love can still bring joy to the suffering soul.

Another lovely report dear Leanne - we are so happy to have you back again after the lovely time you spent with your family overseas !  You and Tango and Bongi are favorites in the KASbarn, always !

Something to recall, perhaps ? It was exactly two years ago today - 7th February - that we walked into the KASbarn to discover everything floating on 10 inches of water after our massive storm on 5th Feb.

We feel so much safer these days, with the skirting boards all repaired and our most useful pallet system which should work perfectly to keep us dry in the event of storms !

The post is pouring in - thank you all for keeping us going on every level !!! xoxoxoxo

A wonderful report, as always, Leanne to start the new year. It's lovely to hear about everyone and all that is happening at the Kas Barn.

Thank you for another wonderful report. So glad to hear that everything is on track for your distribution.

What a beautiful story of the lady with dimentia knitting for KAS....our KAS crafters are the kindest of folk.  I know that your lovely 'fixer uppers' (Barb, Lee, Anne?...my apologies if I have the names wrong) will find her squares a home in a beautiful blanket.

Hurrah for KAS and all our caring crafters for bringing a little sunshine, love and warmth to the children!

Leanne I have loved reading your blog reports and what everyone is up to. Thank you so much for taking the time to do this for us.  It really helps keep us inspired and enthused!

Summer is coming to an end here in South Africa and it has been a remarkably wet conclusion to the season. There has been some flooding in informal settlements and a noticeable drop in nighttime temperatures.

I was unable to attend opening day yesterday but wanted to post an update because of our big ongoing project. You will remember that we committed to distribute 900-plus blankets in April in partnership with a lady named Tracy Timberlake. here is what Ronda had to say about progress after yesterday's visit to the barn:

"We had a big post this morning and several boxes from Croatia with some beautiful blankets inside them, along with all sorts of other items. Also, Tracy Timberlake came to collect the first 50 bags of blankets, along with 500 beanies and handwarmer sets so they can get started rolling the blankets with smaller items inside them, to make handout easier considering the large number of children involved."

This "rolling of blankets" is something we do quite often as it really makes distribution easier. Instead of asking the children to line up to receive a blanket, than a beanie, then a set of hand-warmers, then a toy, we roll the beanies and hand-warmers into a blanket and tie it with a bow. if we have enough toys for that particular distribution, we also attach a toy to the outside of the bundle which really gets the children excited.

Ronda added, "Tracy is amazing – she is expecting her 6th child in 11 weeks and looks like a teenager – neat and agile still! Audrey was back this morning, after three weeks holiday in Kwa Zulu Natal. Nani and Themba went to deliver 20 bags of squares to 4 gogo groups and collect 117 completed blankets from two of those groups … it looks as though we will quite easily fulfil the rest of Tracy’s distribution requirements because we are expecting to collect more blankets next week as well."

Estelle will be posting pictures on Facebook as usual so please be sure to link to the Knit-a-Square Facebook page if you haven't done so already.

We've received some lovely thank-you letters from recipients of blankets which I've been saving, and now is a good time to share them.

The first is from the Tswelelopele Community Creche in Warrenton, Northern Cape following Vivienne's December 26 distribution:

"Blessed is the hand that gives, because it will receive abundantly. Words will never be enough to thank you for what we received from Knit-a-Square.
May the good Lord continue to bless you and your families, so that you may look out to the needy.
Thank you so much
Yours,

Finally, one from Kambuzuma, the place in Zimbabwe where Athele and her friend Tanj have been distributing blankets:

"As we look back to the past year, and count our smiles we cannot help but thank you for bringing smiles to so many children at the Kambuzuma drop in centre.
The blankets and the toys really made each child feal extra special and that means a lot to us.
Going into the new year allow us to say thank you and share a pic of our smiles with you.
All the best for 2019 for your organization.
With love and fuzzy Hugs,
Shamiso (Kambuzuma)" 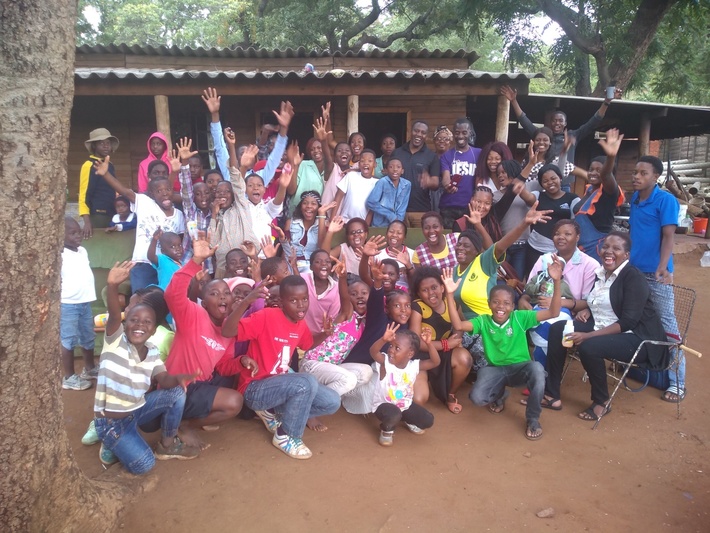 Thank you again Leanne for such an inclusive report from the barn this week.  I sounds like things are very very busy!

Leanne thank you so much for this lovely report!  It is thrilling and inspiring to hear how much our simple squares and hats and handwarmers and toys can mean to those doing the distributing.  It is wonderful to know that not only the children are thrilled but the very large hearts of those caring for the children are encouraged.  We are honored and humbled to be able to be a part of such an undertaking with these partners across the ocean.  Thank you for telling us about them!  We love making a concrete difference in people's lives, being able to help them help the children, it really touches our hearts.

knowing how terrible condiitions are in Zimbabwe its particularly heartening to see the blankets getting distributed there.

Thank you once again, Leanne, for this lovely report and for the pictures.  Tracy certainly is an amazing bundle of energy, it would seem.  What a wonderful effort she is undertaking.  For sure, she will be blessed ... along with all those she is working to help ... xo