Glad to hear that all went well with your surgery, Leanne.

Thank you for another positive, uplifting report. Wonderful news on the PDF booklet...a great way to spread the word and create more opportunities for more people to warm the children, without creating more work for 'The Team'. Thank you to Mpact Recycling.

Great news about your op Leanne, I imagine you appreciate any improvement in your visual field.

Top of the list for good news is that we celebrated two birthdays today. Lindi and Athele were both wished health and happiness, as well as being thanked for their faithful support. There was a big attendance of volunteers which made the celebrations extra festive.

Athele was excited because she has just returned from a trip to Zimbabwe, where she was able to hand out 10 blankets, along with toys and beanies. One of the recipients of the blankets was a young child with a serious wound to the head. When Athele pulled over to the side of the road and handed out the blankets, the women responded as if they had received manna from heaven. "They didn't ask for anything so they weren't expecting anything," said Athele, beaming, "so when I gave them the blankets they could scarcely contain themselves!"

Athele is off again on another trip, this time to White River. She will be taking another batch of blankets with her with a view to finding some more deserving children. The weather in the region is mostly warm throughout the year, so the blankets she picked were all lightweight. It's not always possible to select blankets according to the climate of a region, but it's nice when it can be done.

Also on the good news list is that we have a new Knit-a-Square banner. We used to have about 20, Ronda told me, but they all went missing over time. This one is large and free-standing, and it has its own cover. The plan is to leave the cover in the van during distributions, somewhere plainly in sight, so that the volunteers will be reminded to collect the banner and pack it away before leaving the site. The banner itself  is very bright and attractive, and will no doubt be in evidence in many of the photos of upcoming events.

We also have new labels for our blankets. The labels are manufactured out of a durable label fabric and bear the words, "Distributed by Knit-a-Square SA with God's love". Unfortunately, time doesn't allow us to sew the labels onto the blankets permanently but we will tie them on securely so they carry the message of love to the children. At this point, not every blanket will bear a label either, but perhaps when funds allow, we can place another, bigger order.

Ronda asked me to share another positive piece of news. This one relates to an idea I had a couple of months ago. Did you know that there are websites dedicated to hosting fundraising campaigns for ordinary people who want to support their favourite charity through running a race, cycling, climbing a mountain, etcetera? I don't do anything athletic, but i do knit lots of squares and beanies for Knit-a-Square. So I decided to create a fundraising page and ask my friends to sponsor me R50 for every beanie I knit, with my goal being 100 beanies. It's a simple matter to set up the campaign, and equally simple for people to donate online. The funds raised go directly to the charity with notifications being sent to the fundraiser and donor. Ronda thought this might be an idea for others to try, providing they let her know in advance so she doesn't get arbitrary requests for the KAS banking details from all over the world! Anyway, if you like the idea and would like to try it in your own country, check out my fundraising page for inspiration. Just copy and paste the following link into your search engine:

Now for the bad news. In spite of great support from our members at the start of the year, as well as generous monthly support since then, the Knit-a-Square bank account is taking severe strain. Our expenses have exceeded our income for several months now. Part of this has to do with the rising price of fuel and the increase in rent for the barn. Other costs include the money we pay the gogos to combine squares into blankets, an amount that has increased because of the growth of the gogo groups and the need to supply wool for blanket borders where they are necessary to strengthen the blanket. Of course, there are also the rising costs of electricity, wifi,, auditors' fees, postal charges, etcetera, all of which drain the funds dry. The situation is so bad that Ronda took a decision to cancel next week's opening day. There isn't enough money to transport the volunteers from Soweto and buy them lunch. The only thing we can do is await the transfer from paypal at the beginning of October and try to think up creative ways to bring in more money from a local source.

I hope I haven't depressed you. We in South Africa are taking the view that this is the Lord's work and we trust Him to provide. Things have turned around miraculously in the past, therefore they could do so again. It is times like these that teach us that nothing is certain and that peace comes through letting go of what we think ought to be.

Yes, this is the Lord's work and I'm confident that He will provide!  Can you share with us how much the expenses exceed income for the year?  I'm sure there are Forum members including me who would be willing to give an additional donation if they can.

Here is the link to KAS Finances.  Please see the discussion intro for the most recent Cash Flow graph information up to the end of July.  I post the income/expenses for KAS each month when I receive the information from Ronda.  The August figures will be coming soon.

As you will see, KAS expenses were higher than income for all months in 2018 except for May.  A very generous donation received that month helped so much.

For those who are interested in making a donation, please scroll to the top right of this page.  A monthly subscription or a one time donation would be much appreciated.

A newsy report, the good and the not so good, all important to know for the worldwide KAS members.

Thanks for your fundraising effort and idea.

Leanne I am much encouraged to hear of the PDF for other groups to start up their own satellite Knit A Square communities to help their local people. How wonderful!  I am also glad to hear of your successful cataract surgery.  By the way your reports are wonderfully detailed, thank you so so much!

This first reply was to answer your previous report but ended up down here after everything, so now I'll combine it with my second reply...to your latest report.  I agree the state of finances is a concern.  At times like these I follow the adage to pray as if everything depends on God and then work as if everything depends on me which I'm sure you're all doing. What that means in my case though is that I'm cancelling my current monthly subscription and putting in a new one for a higher amount, one I feel impressed to do. It will help some I am sure.

Meanwhile I am sending some yarn skeins with my squares and toys, perhaps more than I planned since the need for them is ongoing, and my yarn stash needs to go on a diet.   I must rush to get this parcel out of Canada before a possible postal strike here on Sept. 26th. We hope not but you never know.  Meanwhile thank you so much for your reports Leanne! Hugs to you and everyone there. I agree, God will help us sort this all out.

Bless you Jeanne - you have been a real stalwart from the beginning and we truly appreciate your generosity and willingness to help always !

God bless you ALL, these replies to Leanne's wonderful blog are all so loving and full of encouragement ... what an incredibly supportive community we have ... makes me quite tearful (with joy !!).

MUCH love to every single one of you !!!!

From every single one of us at KAS SA XOXOXOXOXOXO

Thank you, Ronda and the KAS SA volunteers!  You are such an inspiration to us.  I started knitting squares--only Plain Jane's--since earlier this year but I have been so blessed to be part of this ministry to the children.

I do have a question.  If we give a one-time donation through the credit card option online, will you be able to access the money immediately or do you have to wait until October?  I really don't know how the funding works.  God bless all of you!

Joy, Ronda will receive the money from the PayPal account some time next week so if you make a donation soon she will have it to put towards the expenses.

I've added the August numbers to the Cash Flow graph on the Finances page.  There have also been a few comments from members you might like to read.

Thank you, Linda.  I made a donation through the KAS Shop that I hope helps a little.

Thanks so much Joy.  Your Shop donation is very much appreciated.

Color Of The Month BLUE 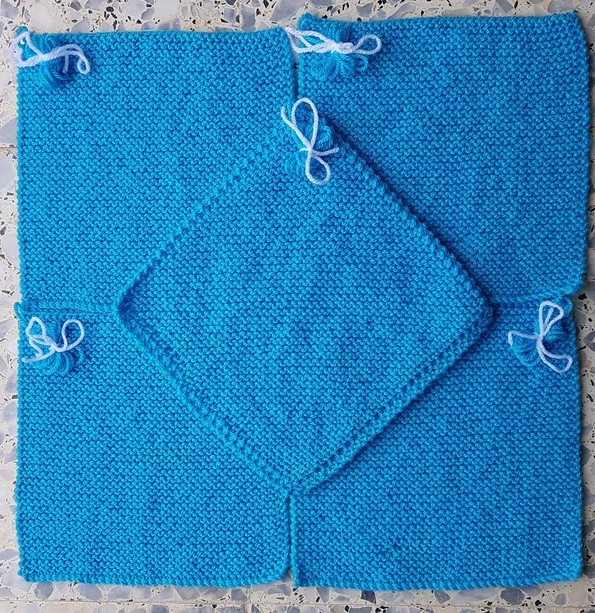