SQUARE HEART OF THE MONTH AWARD 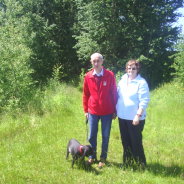 Those who don’t follow the UK Group may not know this lovely couple.  Those who do, know they are kind, caring, and helpful participants in this group.

Tom and Sandra have been contributing to Knit-a-Square since the beginning … 2009!!!  As one of our moderators says, “They seem to be like Duracell bunnies ... the kind of who people who joined up and have just kept going ever since.”

To give you an idea, here are a few excerpts from some of their comments.

~~  Hi all.  Sandra and I sent a parcel yesterday to SA containing 20 squares, six readymade toys, and one colouring book …

~~ another 20 squares from Sandra & Me, 6 toys, a small pack of pencils, and a pair of childs trousers …

~~ we sent by surface mail a packet containing 15 squares, 6 toys, 2 writing books, and 2 packs of coloured pencils & a Christmas card …

~~ we sent a parcel containing 22 squares, 2 hats, and 10 toys retrieved from the Animalcare charity shop ...

Tom, who also knits for an animal shelter, says:  "Re Toys:  I get them from my local Animal charity shop as I can only do plain knitting.  I pick the light ones so I can put more in ... they all help bring a smile to the faces of the children ..."

He adds:  "It's nice to know what I do for pleasure gives comfort to these children ..."

I especially like what Tom tells us about our stashes.  It's so comforting to know that it's never our fault that we have such huge amounts of yarn hanging about :)   He says, "The Stash gets no smaller, because in the Dark of a Knitting bag they multiply!"

Now that we know Tom has a lovely sense of humor, I will tell you what a little birdie told me:

A couple of years ago, Tom reported that he'd packed two parcels on the same day ... one for Knit-a-Square and the other for a Greyhound Rescue organisation.  Unfortunately he switched labels and the wrap for a greyhound was sent to South Africa, and, vice-versa!

I'm sure all ended well, and after the initial frustration over a mistake easily made, someone(s) had a good chuckle ;)

for your constant and continued support of Knit-a-Square

and for the comfort the children receive

Tom and Sandra sound like the very backbone of KAS and certainly deserve the Square Heart Award for so many years of loving contribution.

Your loving, caring dedication to the children of South Africa is truly inspirational. :))

Congratulations, Tom and Sandra! Thank you for your many years of contributing to "our" children. *\0/*

And how lucky is Sandra to have a husband who understands the necessity of having a stash?!  :-)

Though, to give my hubby his due, as long as he is not falling over it, he is quite resigned to my stash (hmmm, the fact that a large proportion of it is hidden in the wardrobe in the spare room probably helps, too....lol.)

Oh yes, my hubby is resigned, too. But imagine having a hubby who's not only understanding of a stash, but enthusiastically accepting of it and even ensures it's continued existence by making sure it multiplies in the Dark of a Knitting Bag! Lucky gal, that Sandra is. :-)

Tom and Sandra, a big congratulations to you both for your steadfast work.  Tom, your comment on the stash in the knitting bag is terrific!

Thanks to Tom and Sandra, who have solidly supported Knit-a-Square from the very beginning - often providing valuable information and bargain alerts on the UK Group Page - and useful advice!

Tom and Sandra very deserving winners, congratulations and lovely hear all you have done for KAS  !

Thank you Tom and Sandra for all that you have done for the children and KAS  through the years. A well deserved award!

Congratulations, Tom and Sandra on this well-deserved award! Your ongoing commitment to the children is exceptional - thank you so much.