Perhaps a snippet of your day?

I invite you, one and all, to visit this new 2015 discussion and share whatever is on your mind.....the good, the bad...and the not too ugly.

Remember, you are among friends. 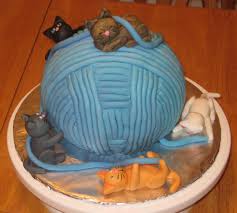 The 2014 Share A Yarn? discussion will be archived, but still available for reading and reminiscing.

This seems the best place to put this . The temperature in Soweto and J'burg is down to 8 C at night. As I woke up shivering the other night with temperatures about that level and had the luxury of making myself warmer it did make me think of how needed the blankets are. I could have done with some hand warmers too in the morning !!  No fun for those families in the informal settlements.

On a better note how about a recipe for that chocolatey and cream dessert ?

Thank you Sue for the reminder of the temps over there.  It's about the same temps here in Canada at night but we have house heat we can turn on at night. I must get going myself on knitting today. I found this and thought I'd share it with our KAS crocheters!

It's now summer for some of us, or almost summer, so I thought this list of actual complaints to a well known travel company might give you a giggle or two.  I particularly am very fond of numbers 5 and 19.

THESE ARE ACTUAL COMPLAINTS RECEIVED BY "THOMAS COOK VACATIONS" FROM DISSATISFIED CUSTOMERS:

1. "They should not allow topless sunbathing on the beach. It was very distracting for my husband who just wanted to relax."

2. "On my holiday to Goa in India, I was disgusted to find that almost every restaurant served curry. I don't like spicy food."

3. "We went on holiday to Spain and had a problem with the taxi drivers as they were all Spanish."

4. "We booked an excursion to a water park but no-one told us we had to bring our own swimsuits and towels. We assumed it would be included in the price."

5. "The beach was too sandy. We had to clean everything when we returned to our room."

6. "We found the sand was not like the sand in the brochure. Your brochure shows the sand as white but it was more yellow."

7. "It's lazy of the local shopkeepers in Puerto Vallartato close in the afternoons. I often needed to buy things during 'siesta' time -- this should be banned."

8. "No-one told us there would be fish in the water. The children were scared."

9. "Although the brochure said that there was a fully equipped kitchen, there was no egg-slicer in the drawers."

10. "I think it should be explained in the brochure that the local convenience store does not sell proper biscuits like custard creams or ginger nuts."

11. "The roads were uneven and bumpy, so we could not read the local guide book during the bus ride to the resort. Because of this, we were unaware of many things that would have made our holiday more fun."

12. "It took us nine hours to fly home from Jamaica to England. It took the Americans only three hours to get home. This seems unfair."

13. "I compared the size of our one-bedroom suite to our friends' three-bedroom and ours was significantly smaller."

14. "The brochure stated: 'No hairdressers at the resort.' We're trainee hairdressers and we think they knew and made us wait longer for service."

15. "When we were in Spain, there were too many Spanish people there. The receptionist spoke Spanish, the food was Spanish. No one told us that there would be so many foreigners."

16. "We had to line up outside to catch the boat and there was no air-conditioning."

17. "It is your duty as a tour operator to advise us of noisy or unruly guests before we travel."

18. "I was bitten by a mosquito. The brochure did not mention mosquitoes."

19. "My fiancée and I requested twin-beds when we booked, but instead we were placed in a room with a king bed. We now hold you responsible and want to be re-reimbursed for the fact that I became pregnant. This would not have happened if you had put us in the room that we booked."  (riiiiiiiight)

Some people shouldn't travel they should just stay at home !! 1&2 made me laugh straight away but I enjoyed all of them !

LOLOL...some people are simply unbelievable....and with their attitude, they need to stay home.....this would surely be less stressful for them...lol.

Oh Jeanne, I had a really good laugh at this. After teaching for 20 years, I decided that I needed a change and went into the tourist industry running a tourist residence. I could write a book about the 20 years of difficult clients. Fortunately 90% of our clients were very nice and some have remained friends. This list reminds me of the lists one sometimes sees of accounts of claims to insurance companies.

So glad these struck a chord with you gals.

Ah yes, Valerie, the infamous insurance claims, like "The hedge jumped right out infront of me."

In nearly 40 years of selling natural dried food, fruits, nuts, herbs & spices etc., my brother Nick and I were left open-mouthed at least weekly from some of the crazy things that people say! One of our favourite questions, asked many times over the years, is "Does the sea salt taste fishy?"..................

The phrase 'The General Public' is a mis-nomer - there is absolutely nothing general about the public - they are all very different!!

Pam, I am relieved to say that it never occurred to me that sea salt might taste fishy! There's hope for me yet, haha.  I do love sea salt, use it exclusively rather than sodium chloride/table salt.

I thought I'd add here some felted wool cuteness shared with me by a friend...I love avocados...so cute when this pair is closed, how they hug each other! These are by Ukrainian artist Anna Dovgan. They make me think of a family, parents hugging their child or soon to be born baby. :)

They are very cute. I like them too and I also love avocados.