Last week you heard about Oliver and Hotel Hope and the wonderful work they do for orphaned children in South Africa.  KAS also supports other organisations who do the most amazing work with children and who are only too pleased to partner with KAS in order to touch the lives of children in desperate need of help.

The first of these organisations I would like to talk about is the Lindelani Reformatory School and how they have partnered with KAS to make a difference in the lives of children in and around the Stellenbosch area in the Western Cape.  Elna Otter, who is an Occupational Therapist working for the Western Cape Government at the Lindelani Reformatory near Stellenbosch, has been receiving blanket packs and other items from KAS in Johannesburg.

Elna with all the the goodies sent to her.

The squares are stitched together into blankets by juvenile offenders at the Lindelani Reformatory, hitherto only boys between the ages of 8-17 years, but more recently expanded to include girls as well.

The project was initially introduced to KAS by Leana who had worked at G4S in Bloemfontein; subsequently we worked with Charlotte and now Elna who has taken it to even greater heights and is most appreciative of the squares and items we send.  She is a mother herself and takes a personal interest in the welfare and rehabilitation of her young charges in the institution.  Under Elna’s guidance several outreach projects close to the hearts of the youngsters have been chosen to benefit from the blankets produced and the other items included for distribution … including projects fending for the elderly as well as those which cater to the needs of pre-school children and babies.

There is a high level of suffering in this part of South Africa associated with alcoholism, which in many cases is the result of farm workers having received a portion of their weekly wages in wine.  Generations later, foetal alcohol syndrome is a major social problem in the Cape, and among teenagers, drug and alcohol addiction results in gangsterism and enormous, ongoing headaches for the Western Cape Government!! 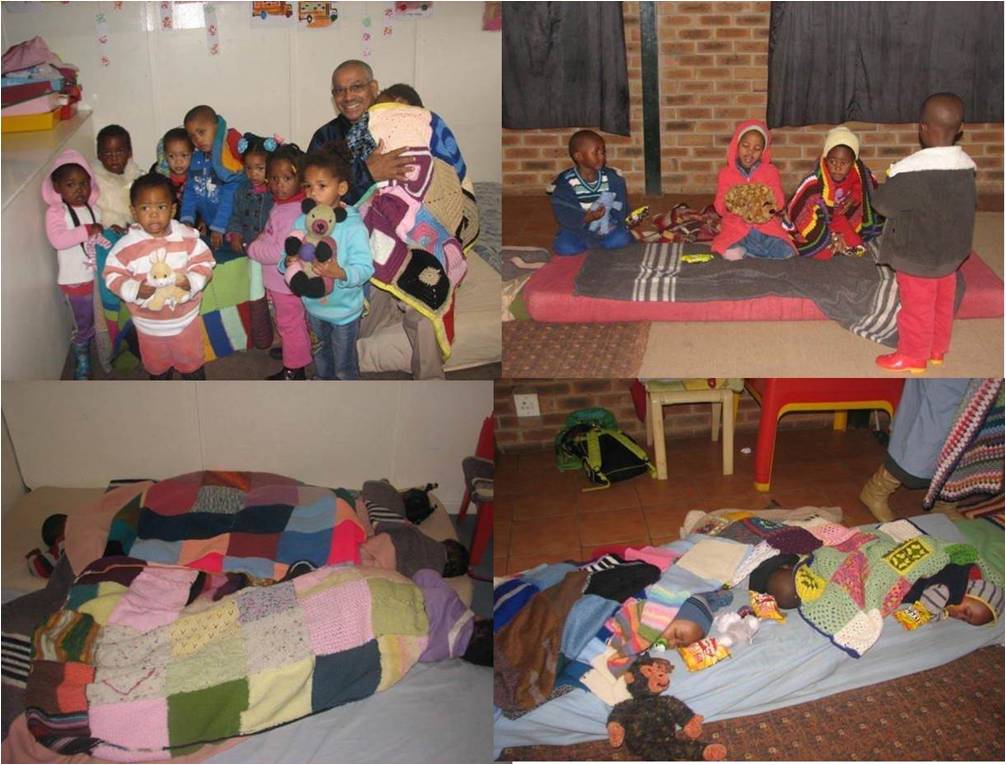 Some of the children who received blankets - all nice and warm!

Another organisation (not dissimilar to Hotel Hope) that receives assistance from KAS is The Peace Agency in Durban.  The organisation was introduced to KAS by a dear friend of mine Annie De Witt.  KAS has been able to send boxes of your kind contributions to the Peace Agency who, in turn, have handed these out within the communities they serve.

Annie and I packed boxes to send to The Peace Agency.

One of the projects that The Peace Agency runs is The Baby House.  In June 2010, Cathy and Justin Foxton set up The Baby House on their private property in Umhlanga, Durban. Here babies are nurtured, loved and cared for in every way as they await the arrival of their “forever mums and dads”. To date they have cared for 20 babies, with 16 having been successfully adopted.

Justin and Cathy also help to incubate new Baby Houses and have been involved in establishing 3 other homes.

This year, a ‘baby safe’ will be installed on the property allowing mothers to safely and anonymously leave their unwanted babies in the care of The Baby House.

Thanks to Peter’s company, PCS, who assists KAS with transport, we are able to assist these organisations that are based many kilometres from Johannesburg.    Peter’s company transports industrial goods by road between major centres in SA and manages always to find space for KAS items!

We currently support, on a fairly regular basis, two projects in the Cape and a couple in Durban too.  Speaking of which, I received a heart breaking email from Sandra Pillay, a Project Manager/Fundraiser for Mama Ntombi’s Community Projects (MNCP) at the beginning of this week.  She spoke of how MNCP were going to assist a little boy called Sbonelo.  Sbonelo lives with his grandmother together with his 7 year old and 4 year old sisters.  In the photo she sent us, Sbonelo is visibly ill and neglected and we are so grateful that he has crossed paths with Sandra and MNCP who have arranged to get medical assistance for the children as well as some food, blankets and clothing.  Thanks to your support, KAS is able to help Sandra help children like Sbonelo and hopefully show him that people do care and that life is worth living!

Thank you for your continuous support and for making a difference in the lives of South African children!!!

What a wonderful report, Ronda. It is great to think we are able to extend our reach by partnering with these other organisations.  I love the idea that juvenile offenders have an opportunity to help by sewing blankets and making decisions about outreaches as part of their rehabilitation.

Hugs to Peter and his company for making it possible for KAS to get items delivered to places that need them.

I can only echo your thoughts, Anne.  For the juvenile offenders, it might be the turning point in their lives.

The help that Peter supplies isn't trumpeted, but is so essential.  Thank You to all who work to improve the lives of others.

Thanks for another wonderful report, Ronda. My heart hurts thinking of all these children who have so little. I thank the powers that be for people like you and Elna and all the others over there who work so hard to bring some comfort to these precious babies.

Isn't that one of Heather's cuddles in the third set of photos?

It is so good to read about the ripples our squares create around South Africa - KAS is full of super team-workers!

Very interesting and informative report.  Thank you so much Rhonda.  Without reports such as these, the plights of these people would probably not be known by others around the world.  Its great to see how KAS assists and makes lives better.

i continue to be in awe of the wonderful work undertaken by KAS, and humbled by the stories I read here.  my group of knitters started in May this year - most of us never knitted before - and we have now sent 1,100 squares for which i immensely proud but more importantly touched that we could do something so small, but significant for these darling beautiful children. God bless everyone involved with this work.

Thanks Ronda and Team for the latest report.   It is always lovely to read your reports and know that our squares are helping to improve the lives of so many children.

My heart breaks for little Sbonelo but what a miracle that his situation has been has been found and that help is on the way. It is lovely to think of a KAS blanket warming him soon and hopefully his grandmother unburdened a bit so she can attend to him better.

Three cheers for Peter and colleagues for finding space to sneak away with KAS items!

There is so much great info- juvenile offenders finding purpose, and wonderful partnerships spreading KAS love everywhere. Thanks Ronda.

It is fascinating to hear of this web of caring organizations and individuals who all help each other and that KAS is able to help them in turn is very encouraging and uplifting to me.  Thank you for a very newsy report, this is a good thing to come home to after my road trip to see my grandson.  He is so blessed to be in a family that loves and supports him and only wants the best for him.

I keep thinking of the "baby safe" and realize it's crucial and much needed, far better than a baby being abandoned somewhere, it just tugs at my heart. My daughter works at an animal shelter and they have "drop off" boxes for people to leave unwanted pets...now the same for babies...SO glad these loving and caring people are going to bat for these children, seeing 3 of them sleeping warmly under their blankets is a great incentive to me!  Thanks again.

You are right Jeanne your little grandson is truly loved.

In the place I work we have people to take children into their homes and some of them come from overseas where they have been left at orphanages sometimes outside the door, or in cubby holes for babies. We always tell the parents to say to their children that their mother and father left them in a safe place where good people would love them.That is just what Cathy and Justin do. It does no child any good to feel they were "abandoned".

Thank you, Ronda, for taking the time to write this report.  It is so encouraging to read of other organisations and self-initiatives that KAS is linked-up or involved with.  However, it is very sobering to hear how far-reaching are the effects of manual labourers being paid in kind/wine.  Let us pray for a solution while we knit one square at a time.

Thanks Ronda. Your report is heart warming and I'm sure it will encourage all of the Nifty Newport Knitters to keep knitting. Thanks for all the wonderful work done by Kascarers. 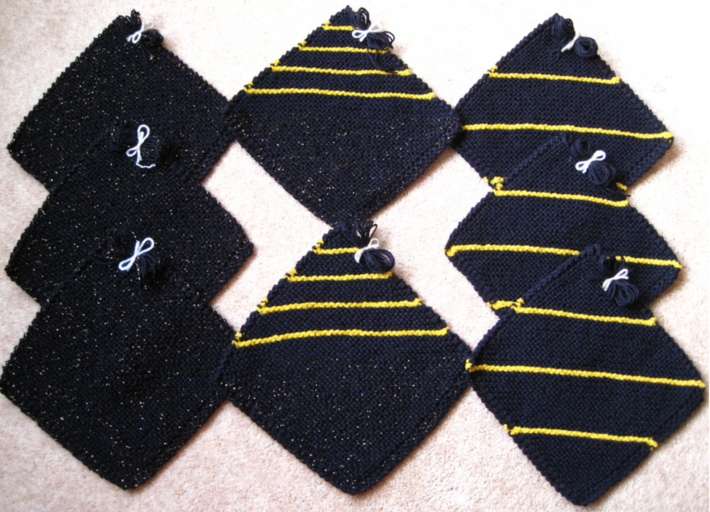