The Knit-a-square program has inspired volunteers in more than 60 countries to knit and crochet more than 1.5 million blanket squares, hats, hand-warmers and toys. Your efforts are helping to keep the children warm but to keep this operation running every day, we need to extend your love and support.

Your donations are the backbone of financial support for the operations on the ground in South Africa, making it possible for them to continue.

Whether it's helping to pay the rent, a stipend for the gogos to sew blankets, fuel for the KasVan or to cover postal charges of $3.75 US per parcel, you make it possible to keep striving toward warming and comforting the children.

Our goal is to remove the monthly deficit that Ronda and her team have to deal with.

Please follow this discussion for monthly updates, current financial reports and ideas on what we can all do to help.

Welcome to the KAS Finances discussion for 2020!

This year started off on a good foot with $400.03 raised. Watch for new items this month, including a FREE download! 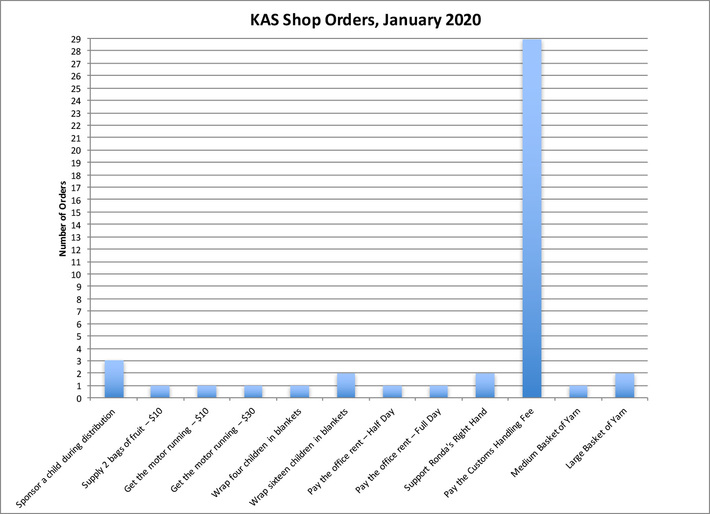 Thank you for the graphs, Andrea....and the update on new additions to the shop.

Soooo good to see that December's donations outpaced expenditures, but we mustn't rest on our laurels, as we know how quickly that can turn around.

Andrea, can you tell us in what currency the above cashflow chart is in?  There seems to be a big spike in income in December.

Hello Mili, obviously a I’m not Andrea! I don’t know the answer to many questions, but I do for this one, the currency is US dollars.

It’s always good to see positive spikes, and I guess this is due to  the Christmas fundraiser and it being the season of goodwill. As Bev as already said, sadly the situation can change very quickly.

I am having major technical problems and cannot send a donation via Paypal.  Please advise or may I simply send cash (paper notes wrapped carefully and securely) to a member in the UK PLEASE.  There will be other donations once I get the hang of it.

My pc is on the  blink so there is the Royal Mail. The old standby.

I am desperate to receive information due to needing to plan and budget for the rest of this year.  Blanket panels to finish , a near useless pc, working on a collection of toys, and after reading the poem on go-go girls,  do they need shawls for warmth or not?  I will have leftover pieces of knitted fabric to use -not appropriate for toys or children's blankets.  Other factors have to be borne in mind.   So I shall send this email, fingers crossed, it will arrive safely and appropriate action taken.   Many many thanks.    CC UK  Europe    ps My business colleagues will help KAS when I have other commitments too.  70 this year!

Thanks, Andrea, for the wonderful graphs. It looks like there was a shortfall every month in 2019 except for February and the amazing spike in December.

I'm trying to wrap my head around all of this, so I have a few questions.

Am I right in assuming that most of the KAS income comes from our ever-important ongoing subscriptions? I have the feeling that this is what really keeps KAS afloat. It's an amount that Ronda can depend on each month, supplemented of course by one-off donations, income from the KAS Shop and our occasional fund raisers.

How on earth does Ronda manage in months where there is a shorfall?

Does the income spike in December mean that she will have a 'cushion' going in to 2020 that can be spread out over the next several months if there is a shortfall?

I wonder if Ronda would wade in here and explain what is KAS' main source of income and how she manages, particularly if there are several shortfall months in a row. It amazes me that they manage on such a limited budget and it would be a shame if lack of funds ever slowed down the vital work we are doing.

I think we all need to keep in mind that squares are not enough, and the best way we can support KAS is by signing up for even a small ongoing subscription of $5-10 per month.

I realize that everyone is paying large postage costs to send their squares, but this can be reduced somewhat by saving up our squares and mailing larger parcels less often.

Yes a bit of clarity would help. I think you are right what really keeps KAS afloat is the regular subs. Even $5 a month is taking away some of that worry. I suspect that once the surplace is away it  is Ronda and her husband who take up the slack.

The financials have been updated above.

Here is the expenses breakdown for January: 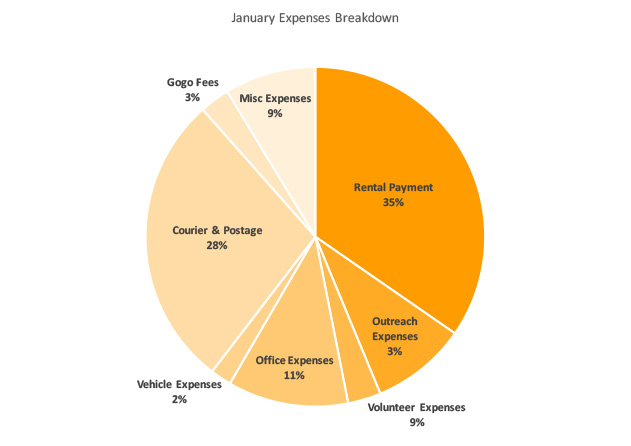 Below is a refresher of what is included in each category.

Thanks, Andrea, especially for the 'refresher'.  Can you tell us what is included in the enormous 28% that goes to Courier and Postage?  Is it mostly Customs and handling fees or are there other expenses in this category?

I wish I could. Ronda lists it as simply “Courier & Postage” in the Excel sheet. If I had to guess, I would say Customs handling fees are included. This would make sense because I just remembered that Ronda freed 4 or 5 parcels from the post office last month.

Despite being a leap year, February is still a short month so our total of $240.79 shouldn't be too surprising. 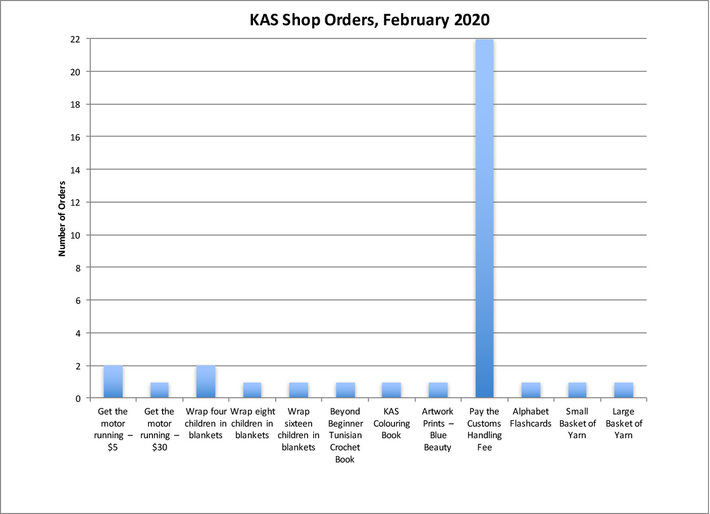