Let us raise our hooks and needles to 2 creative women who turned the desire to provide warmth and comfort to Orphaned and Vulnerable Children into a reality:

Here’s to Ronda and Sandy ! 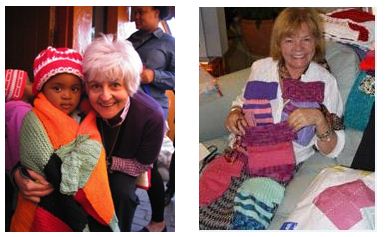 Five years of giving children and their carers hope and dignity. . .

One square at a time 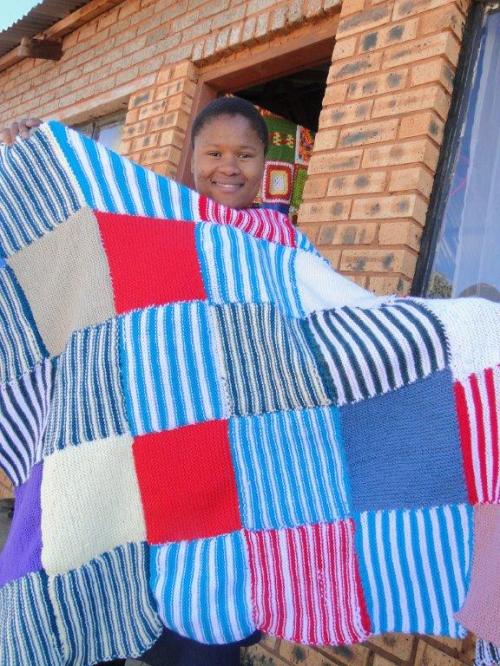 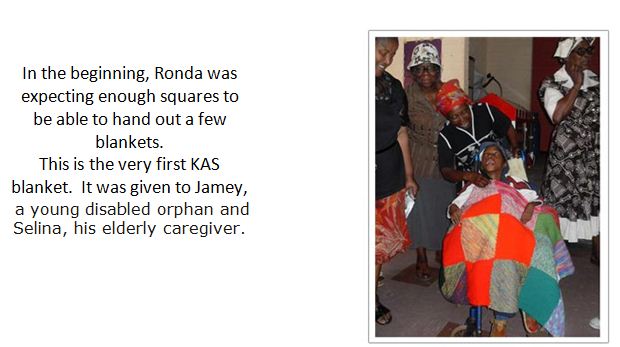 Click here to view a short video of Jamey receiving his blanket.

The trickle soon became a river as more and more people from around the world  sent squares. 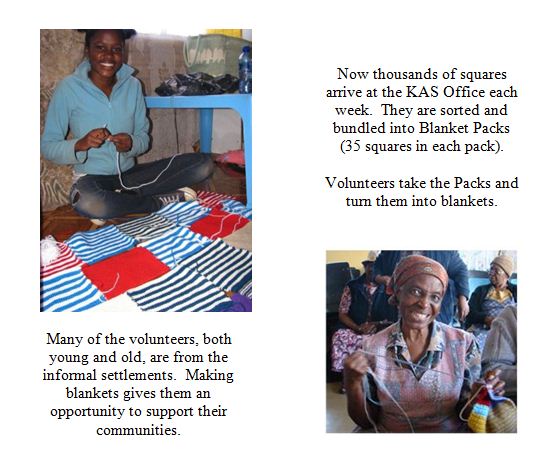 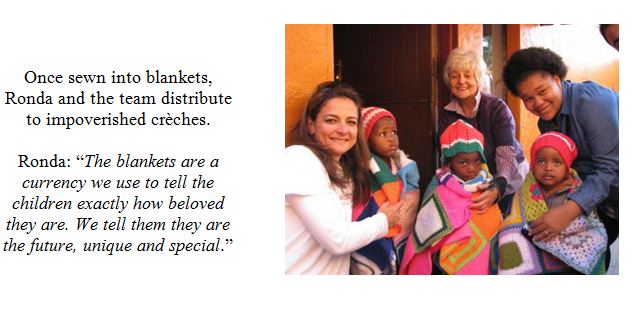 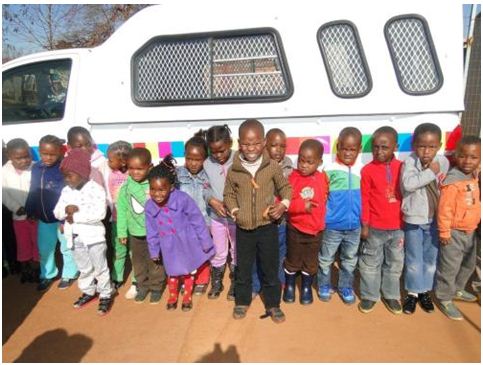 the KASvan was given to Knit-a-Square by G4S.

Her faithful companion could now be retired. 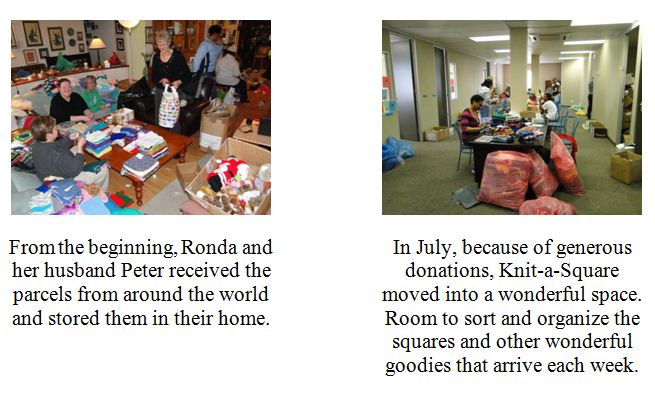 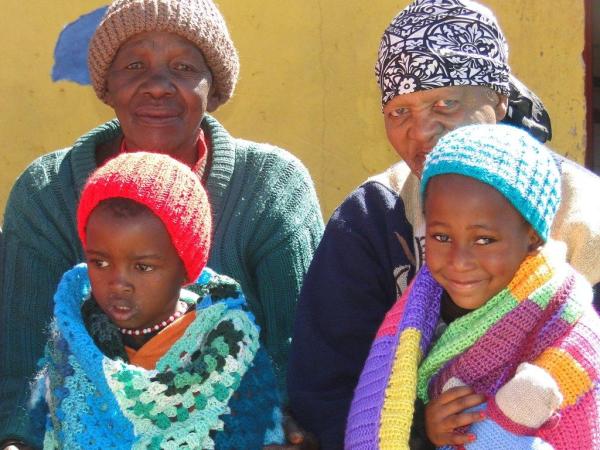 These lovingly made squares sent by you, the knitters and crocheters translate into hundreds and, indeed, thousands of blankets.

and to women who, with little support, set up the daycare centres to give the children a fighting chance at life. 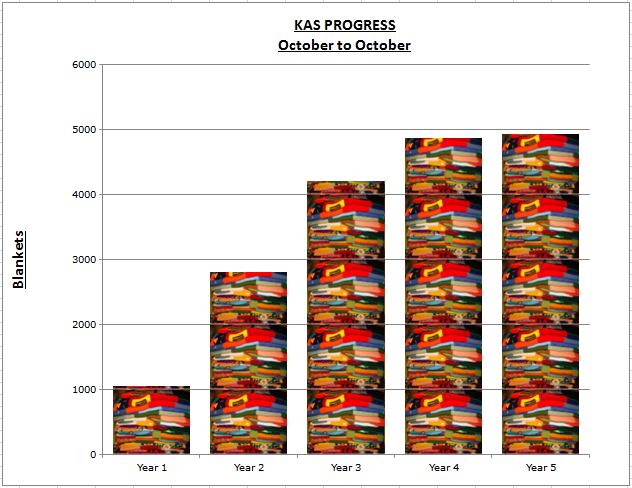 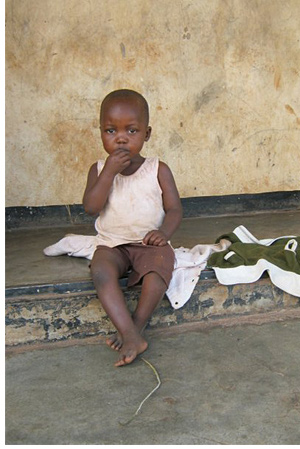 Please continue to send squares as we need thousands of blankets to bring comfort to the many, many children who have not been yet been reached.

Thanks for documenting this Linda.  It's hard to believe it's been five years already, and equally hard to believe what we've accomplished in that time.  We've still got a long way to go, but I know our Kasfolk will continue to make it happen.

This is very nicely put together, Linda....thank you for sharing a wonderful recap.

Thank you, Linda, for this celebration in pictures and words. It is just amazing how KAS has grown and continues to grow because of like-minded people around the globe.

How thoughtful, Linda. Thanks so much for providing this information, highlighting the growth and progress of KAS from such humble beginnings. An inspiring read indeed.  :)) I hope we see the graph continue to climb ever higher.

Permalink Reply by Cherry Ames on October 6, 2013 at 10:36am
Oh! I had no idea! It is wonderful to see how the number of blankets distributed each year is still climbing. Thanks, Linda for pointing out the anniversary for us :).

Shared on FaceBook and Tweeted...this is indeed momentous and so encouraging and thrilling.  Hooks raised high indeed in salute.  Hugs and love to all of you for working so selflessly, so long and so hard to give these children a fighting chance. BRAVO.  I say again BRAVO!

So happy to be celebrating with everyone !

This is beautiful, Linda! Thank you so much! I'm with Sharon, the graph is awesome!

Fantastic 'wrap' Linda. Thank you. Excuse me now, I have to go and knit.

Oh, Thank You, Linda for this wonderful reminder of how a simple idea grew and grew.  It is truly amazing.

I remember reading somewhere that the decision was made to use 8" squares because one could be folded in half and mailed in a regular business size envelope for minimal postage.   I don't know if that is true.   I get a chuckle now when I think about it, because of the pictures of the huge bundles of squares that arrive every week at the office.   I have to think that the world of knitters and crocheters recognized a good idea when they heard it.

Congratulations to everyone who works so hard to add a tiny little bit of comfort to a child's life.

Much love, all around.

(P.S.  Linda, you know how I love graphs, and the one you created here is terrific... love the picture you used for the bars!  As they say here in AUS, Good on ya!)