Many of us have enjoyed a good chuckle or interesting moment in the Share a Yarn and Furry Friends discussions, haven't we?
Being the continually evolving community that we are; as of this moment, these two discussions shall become one.
Welcome to FUNNY and FANTASTIC! 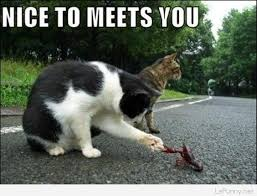 Please feel free to share a pic, a funny story or maybe a link to a video about...... anything.
We'd love to know what puts a 'smile on your dial' and a 'song in your heart'.

Hi Leanne, I use Wool Warehouse as they have very good quality yarns for extremely good prices and deliver very quickly. They do gift vouchers or I'm sure you can send to a different address from your own.  You can also get a discount code for them on the internet. Good luck!

That's great Claire.  I've had some good leads from the UK group including this one so will give it a try.

Permalink Reply by Sharon Fennell on November 1, 2017 at 11:20am
Code SC10 normally works for them and you get 10%. Service excellent also yarn is always delivered in a lovely net bag, which is handy to store projects in.

Thanks for the tip, Sharon!

I use Wool Warehouse also and am very satisfied with them. They have a good range of products and deliver rapidly. I love the net ag that yarn is delivered in.

We had such a blast in the KAS KRISTMAS discussion over the last month. Let's keep the fun going here in this discussion, because after all this is the spot for chatting about everything under the sun, sharing giggles, yarn news etc.

Whether you contribute or just drop in to browse, you are welcome.

Canada and the north eastern US are experiencing 'face cracking' cold temperatures this week as we are being treated to blasts of Arctic air coming south.  We measure our temps in Celcius, and the other day it hit -40 with the wind chill factor here in southern Ontario.  Interestingly, -40 Celcius equals -40 Fahrenheit, so you know how cold it was if you are still on the Fahrenheit system.

I got this email from a cousin today - still chuckling...

How the weather network does it.

It’s late fall and the Natives on a remote reservation in South Dakota asked their new chief if the coming winter was going to be cold or mild.

Since he was a chief in this modern society, he had never been taught the old secrets. When he looked at the sky, he couldn’t tell what the winter was going to be like.

Nevertheless, to be on the safe side, he told his tribe that the winter was indeed going to be cold and that the members of the village should collect firewood to be prepared.

But, being a practical leader, after several days, he got an idea. He went to the phone booth, called the National Weather Service and asked, “Is the coming winter going to be cold?”

“It looks like this winter is going to be quite cold,” the meteorologist at the weather service responded.

So the chief went back to his people and told them to collect even more firewood in order to be prepared.

A week later, he called the National Weather Service again. “Does it still look like it is going to be a very cold winter?”

The chief again went back to his people and ordered them to collect every scrap of firewood they could find.

Two weeks later, the chief called the National Weather Service again. “Are you absolutely sure that the winter is going to be extremely cold?”

“Absolutely,” the man replied “It’s looking more and more like it is going to be one of the coldest winters we’ve ever seen.”

“How can you be so sure?” the chief asked.

The weatherman replied, “The Natives are collecting a major load of firewood.”

Hahaha ... Anne, this is so funny.  Weather forecasts are notoriously "inaccurate" and now I know why ... LOL xo

Anne, you had me hanging on every word, right to the end.  Loved it!  HAPPY NEW YEAR to my KASsisters and KAS SA.

I can never understand how the comparative celcius/fahrenheit system works....how can they both become equal at -40?....I guess when it reaches that cold, who cares????....it's just freakin' cold.  :))

I love this story. I heard it almost every Winter when we lived in Canada, with variations.