On Tuesday, 3 December we took another long trip to distribute blankets in Evaton.  We collected Wandi and Lindi and headed off to meet with Connie, a long-time friend of Wandi’s from the Methodist Church, and now a firm Knit-A-Square supporter.  The directions we had been given were not much help, but after having made many about-turns and detours through the area, we now know Evaton quite well!!

Our first stop was to take tea to the gogos and some of the elderly gentlemen (Mkhulus) of the area, who have been helping sew together blankets for us.  We have decided to also assist this group of elderly people with a small donation for each blanket sewn together for KAS – much like the folk in Chiawelo.  They were very grateful for the offer and greeted the news with ululating, singing and dancing. Their enthusiasm for life, in the face of hardship, is contagious!! 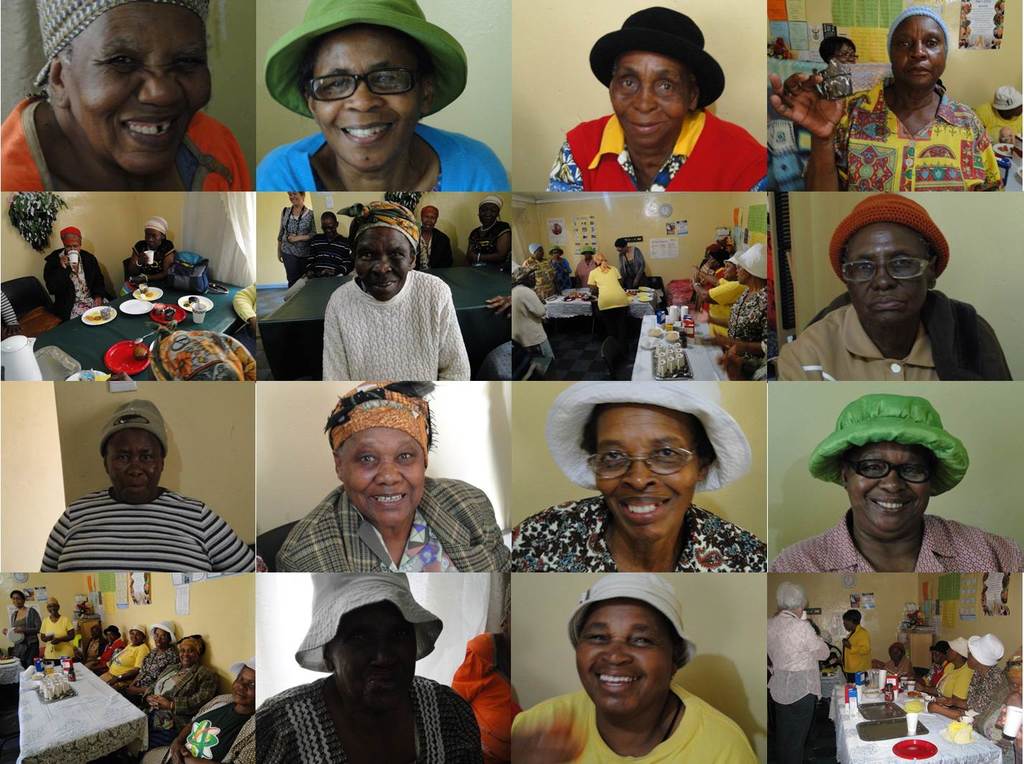 Tea with the beaming gogos!

They really did sew the blankets together beautifully with many of them crocheting around the edges to give the blankets even more structure.  They, too, rolled them into bundles – clearly an easier way to store and transport them. 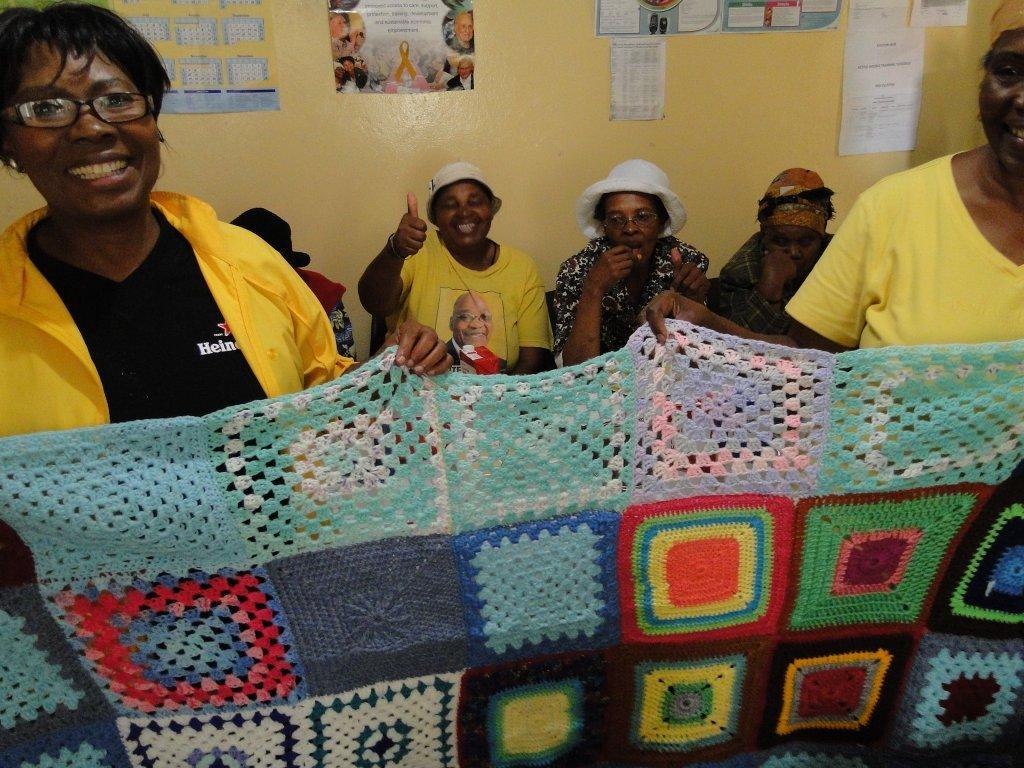 Connie on the left with one of the blankets the gogos had stitched.

We loaded the KASvan with all the completed blankets and headed off, following our rather unusual escort – an ambulance!  Connie’s own car had broken down, but her family runs a private ambulance service in the area … so, when all else fails why not use the ambulance to get you there?! Reagile is a Day Care Centre run by yet another amazing lady, another Tsidi!!

Tsidi was a high school teacher for many years, but started to realise that the small children in the area were not receiving an adequate grounding, or encouragement to believe in themselves, during their early development years and by the time they reached the level of high school, where teachers like herself were struggling to be true mentors to them, there was less hope of changing their attitudes or enthusing them to seek any level of success in their lives in the future.

So, she stopped teaching at high school level and opened Reagile in Evaton.  The name Reagile means, “we have built” and we assume that refers to the foundations needing to be in place which is so apt.  At present there are 65 children cared for at this centre and they were friendly and enthusiastic! The children listen to Connie explain what KAS is and that people from around the world care dearly for each and every one of them.

The children sang and danced for us as we distributed the beautiful blankets, toys, tops and socks.  We also distributed red and white beanies as a symbolic gesture shortly after World Aids Day.

We have been experiencing a great deal of rain lately and had managed to collect enough rain ponchos for each of the children to receive one … and how appropriate, because AS we did so … as if on cue … the heavens opened in a great deluge ! 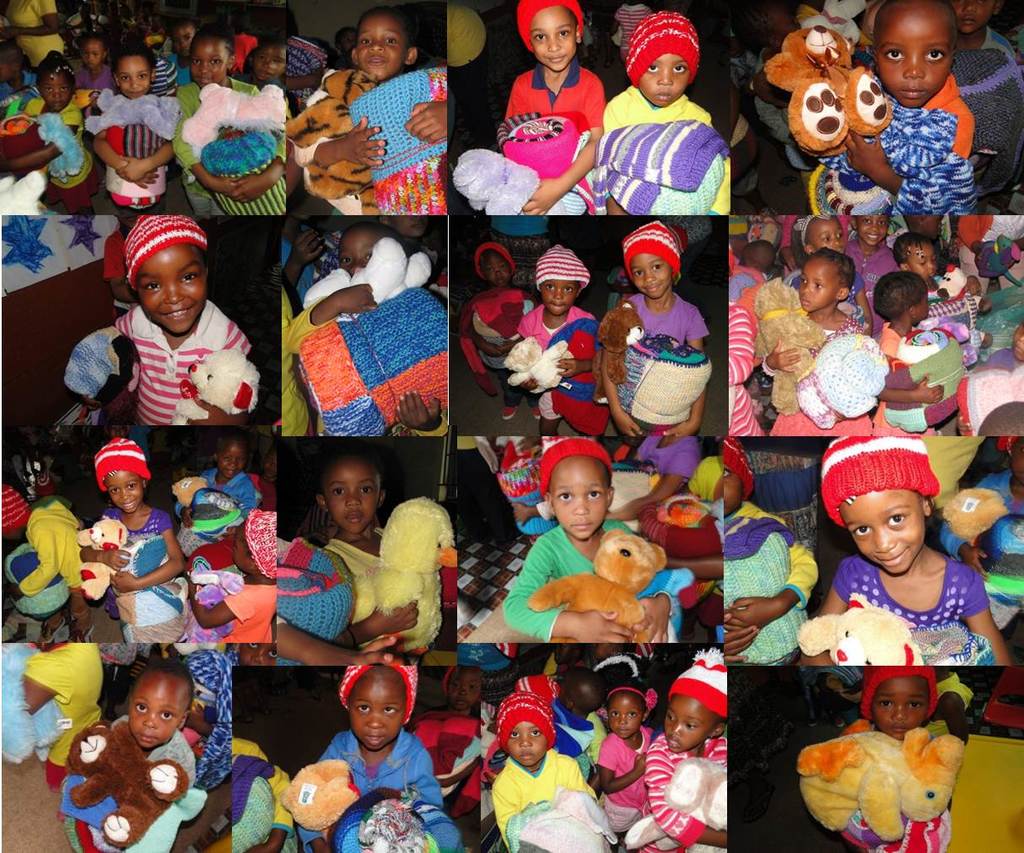 It was an interesting drive home as the heavy rain continued –

Wandi and Wendy gave me the name “Racing Ronda” because they were in the back of the van and, with the windows all misted up and the noise of the rain combined, felt as though I was travelling at the speed of light along the freeway!!   Of course, I was doing no such thing (!) but between the two of them, they decided it would be very funny to pose for photos of themselves, hanging on for dear life!

Well, at least they have fun in the back of the KASvan! 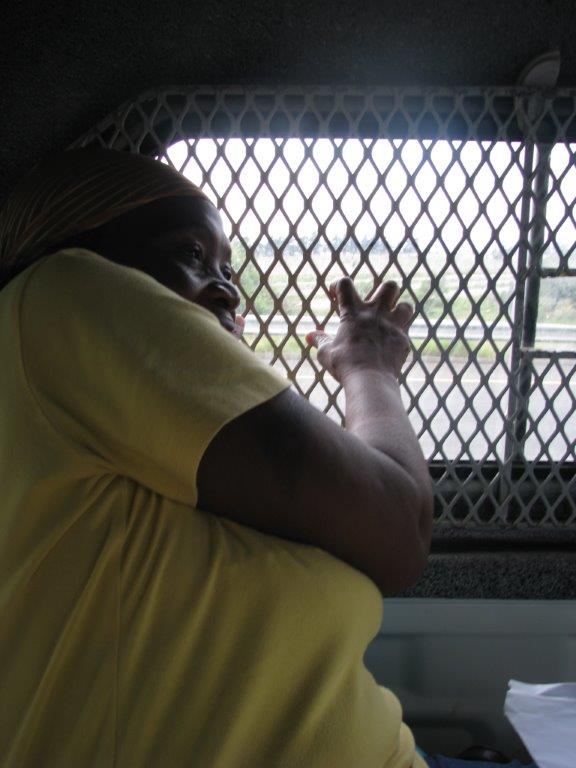 Wandi pretends to “hang on for dear life”!

This was another wonderful distribution and we look forward to working closely with the elderly in this area and through Connie and Wandi identifying more children who will benefit from our assistance.  Evaton – we will be back! The red and white beanies are a riot of cheerful colour!

NOTE:  Ronda is away on holiday and Wendy will be holding the KAS fort in Johannesburg until early January.  We will not post a full report next week or the week after.  May you all enjoy a peaceful Christmas and a New Year filled with love and happiness!!!!

wonderful report and i have some rain ponchos to send to you! a good reminder to parcel them up

So good to hear that KAS will be paying the Gogos and Mkhulus a stipend sum for helping to produce the blankets. Although, small by western standards, it will buy some extra treats for these wonderful Ladies and Gentlemen!  They truly deserve it. They have given so much support to Knit-a-Square these past 5 years and not much could have been achieved without them!

I agree that these small fees paid for their hard work in assembling the blankets gives the elderly gentlemen and ladies not only treats but a feeling that they themselves are of value and are being paid.  What a priceless gift! I'm so glad we're able to give them that, they truly do deserve it and more. Wish we could give them hugs too!

I like being able to click on the photos to make them larger. In viewing all the super red and white hats and seeing how some are barely large enough it makes me even more determined to make long hats so that their brims can be turned up to give extra warmth...when I ever go back to making hats that is, as we have more than enough of them right now and squares are needed more than anything!

I got a good chuckle out of Wandi hanging on for dear life as the "mad woman" in the front drives at "breakneck" speeds...tsk tsk. Quite amusing!

I love the idea of rolling up the blankets....a fun thing to do but probably not easy to stack them like that!

I hope the children do indeed get the feeling that there is hope for them and they CAN break out of the cycle of poverty, that they DO matter.  What Tsidi is doing with the children is so crucial and life-giving and it's an honor to be able to help her.  Thank you so much for this report ladies and I hope you have a peaceful loving hope filled Christmas and New Year.  We promise to keep on pestering you with squares!!!

Wonderful smiles!!  Another story about many selfless women and men.  We will continue to do our bit to support their efforts.

Reading the reports like this make knitting the squares so much more meaningful. The excitement on the children's faces in those lovely colourful photos. It's good to know that the whole community becomes involved with the sewing of the blankets and I think it is wonderful that you can now offer the small payment to the gogos.

Keep up the good work!

Merry Christmas and a peaceful New Year to all.

GET THE MOTOR RUNNING! 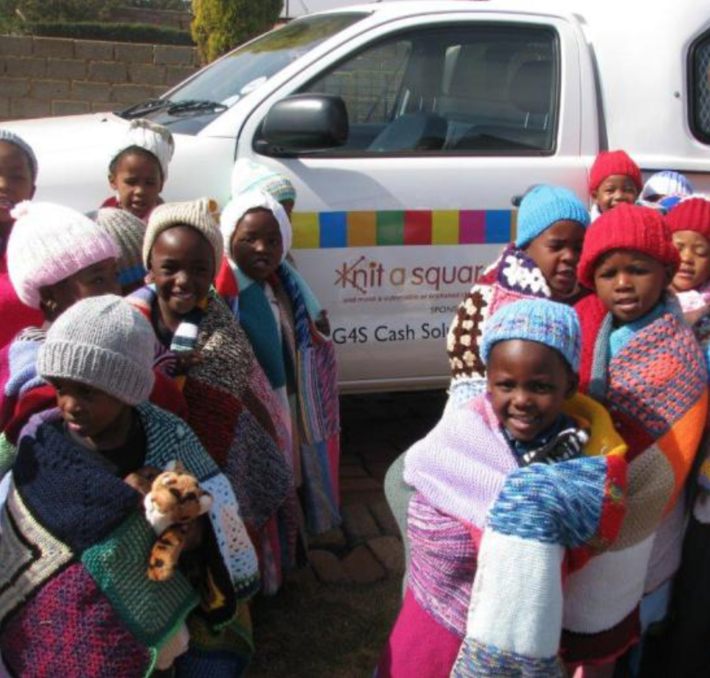 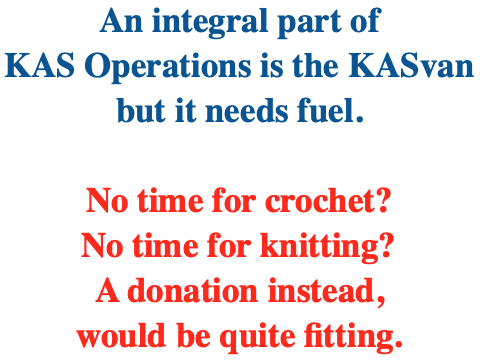 Color Of The Month Gray/Grey