July is always a special month in South Africa. Nelson Mandela, an anti-apartheid revolutionary and politician, served as President of South Africa from 1994 to 1999, the first black South African to hold the office. Mandela spent 27 years in jail for his anti-apartheid activities, finally being released in 1990.  He was awarded the Nobel Peace Prize in 1993.He is held in deep respect within South Africa as the "Father of the Nation" and is often known under his Xhosa clan name of Madiba

Mandela Day, July 18, the day of his birthday, has become an international day of recognition this great man.

Madiba said “it is an occasion when each of us takes a step, through some act of community, to realize the power in us to change the world”

Around the world, people recognize Mandela day by devoting 67 minutes of their time – one minute for every year of Mr. Mandela’s public service – by making a small gesture of solidarity with humanity and a step towards a global movement for good.

KAS in South Africa will be having a special event to mark this day. Here on the forum, we could do it by devoting 67 minutes to making a square, posting it here, and naming our country.  Wendy will be registering both events on the Mandela Day website.

As we honour Mandela this day, you might want to choose symbols of peace, love or freedom for your Mandela Day squares….. or rainbow colours to represent The Rainbow Nation of South Africa. Africa is such a colourful continent that it offers lots of scope for wonderful squares.  I hope our Plain Jane square-makers will bombard us with squares in a riot of colours - You might want to use the S.A. flag for inspiration - green, blue, red, yellow, black and white 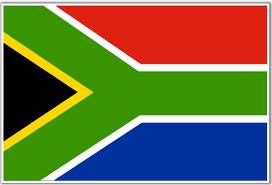 Some folks might want to use the marvellous South African fabrics for ideas.

Some of you creative souls will want to try special squares featuring the wildlife or African flowers.  Remember - these are for children, so simple childlike shapes are perfect.

I hope everyone will have fun with this challenge – I know the children will enjoy these squares because they will identify with the African themes.

Please remember to record the squares you make in THE DRIVE TO FILL RONDA’S KASVAN at http://forum.knit-a-square.com/forum/topics/the-drive-to-fill-ronda...

Once again, our Gitta has stepped up and offered to create an album for this Challenge.  You can find it at

Laurie Fortier has created us a Pinterest page - don't miss it! 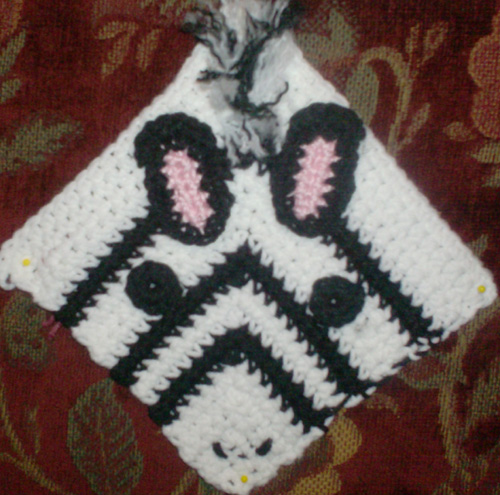 Thank Anne, when the Moderator Team selected this topic of African Animals and then added the Nelson Mandela Day, we had no idea that this was going to be a critical moment in Mr. Mandela's life.  However, this is the perfect way for us as an organisation to celebrate and respect his contribution to Africa and the world.  Many of us around the world watched that historic moment in 1990 when he made his Long Walk to Freedom speech upon being released after 27 years - we were enchanted that he spoke without bitterness or rancour.  His firm, but fair speech, marked him out immediately as someone who was very very special.

Nelson Mandela, Inaugural Address, Pretoria 9 May 1994 after being elected President of South Africa

We enter into a covenant that we shall build a society in which all South Africans, both black and white, will be able to walk tall, without and fear in their hearts, assured of their inalienable right to human dignity – a rainbow nation at peace with itself and the world. 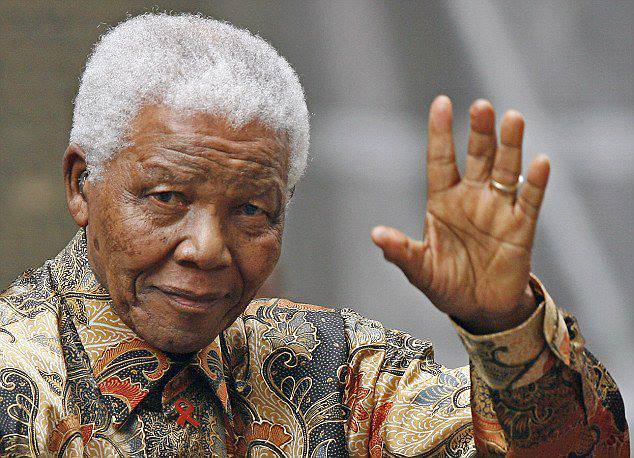 What could be better than to spend 67 minutes on Mandela Day than producing a square for one of the children of South Africa - we feel certain he would approve!

Let's help fill Ronda's van this month all you plain jane square makers.  Here are some in the colours of the African flag.  The 'slip-ins' are toys that my grandchildren used to play with when they came to visit.  Guess I'm just a pack-rat, but I knew these would come in handy some day 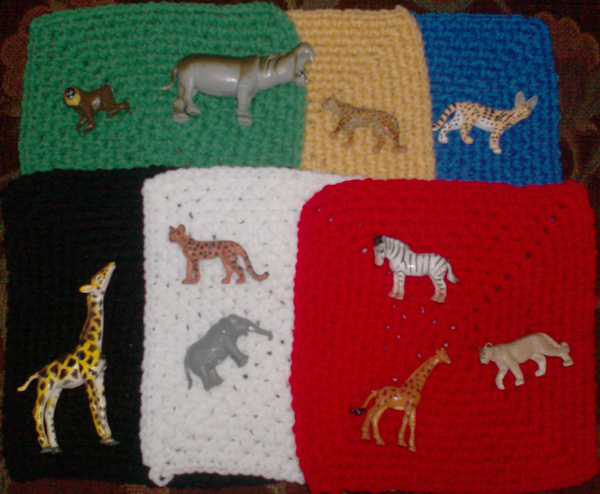 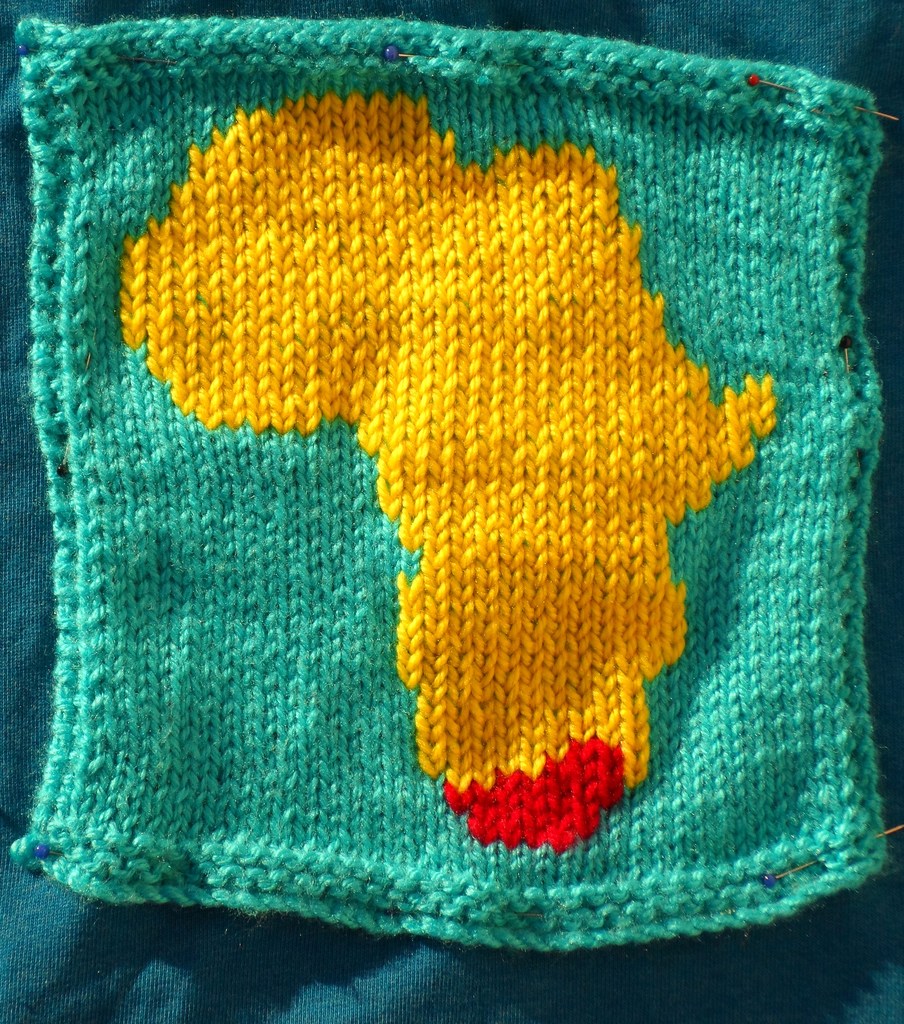 South Africa is the red section....once again colours are not true in the pic, but the general idea is there. This pattern comes courtesy of a fellow KASer, Julie Kempton.

Here is the link to the pattern:  http://forum.knit-a-square.com/forum/topics/member-s-patterns-squares

Nelson Mandela Quote: “Appearances matter — and remember to smile.” This is the first of a bunch of colorful squares I will be making to represent Mr. Mandela's quote. 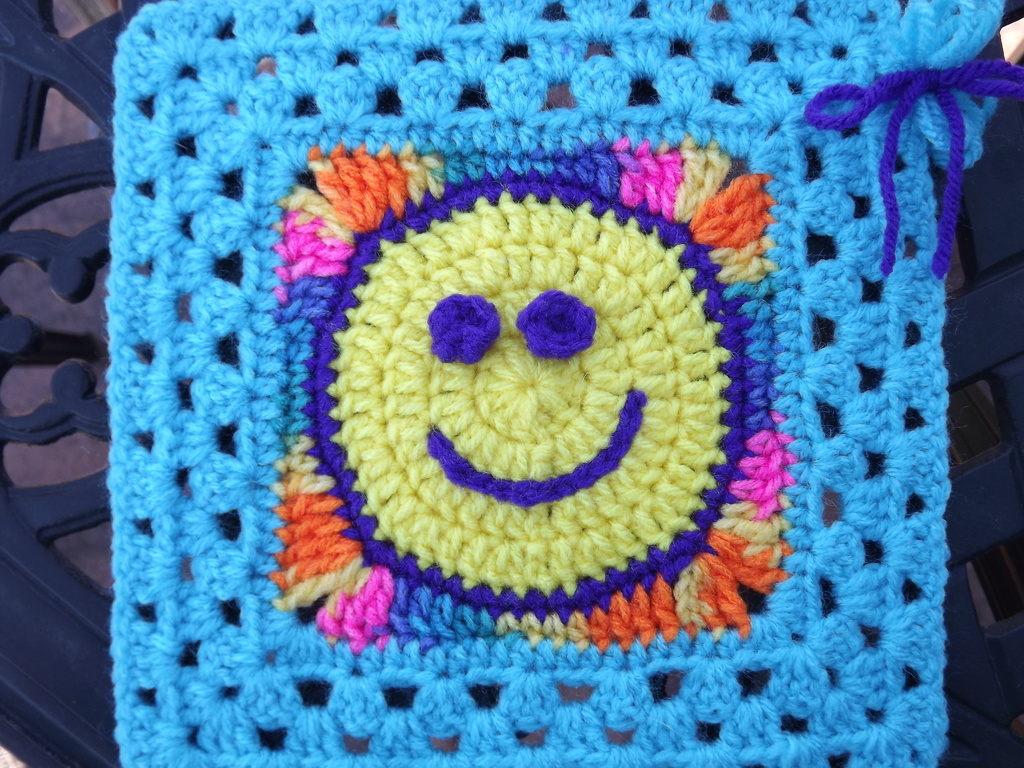 Thank you Anne for leading this challenge.  It is a respectful way to honour Nelson Mandela at this difficult time in South Africa's history.

My first squares for this challenge.  I used Andrea's Jigsaw pattern as it reminds me of African patterns. 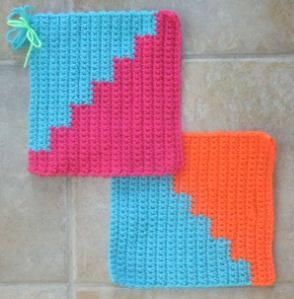 Thank you, Cherry!  Here are my first squares for the July Challenge. 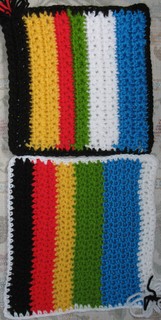 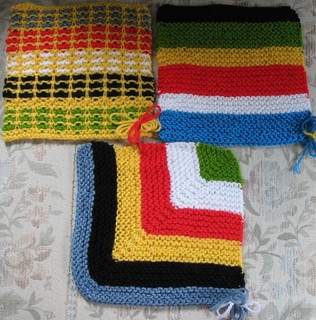 I was attempting to make a square that represented Mandela's Long Walk to Freedom and thought footprints would give a hint to that, but these didn't turn out quite right ... probably the longest, skinniest feet I've ever seen ... LOL

There might be other attempts at this later this month .... 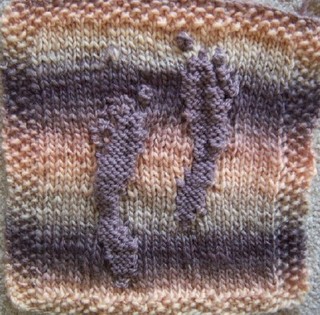 I love making animal squares, and African animals are so exotic and fun.

This is a two-sided square, so both front and back are shown. 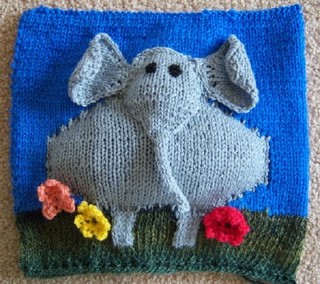 Second square in the set.  Think I like it better than the first. 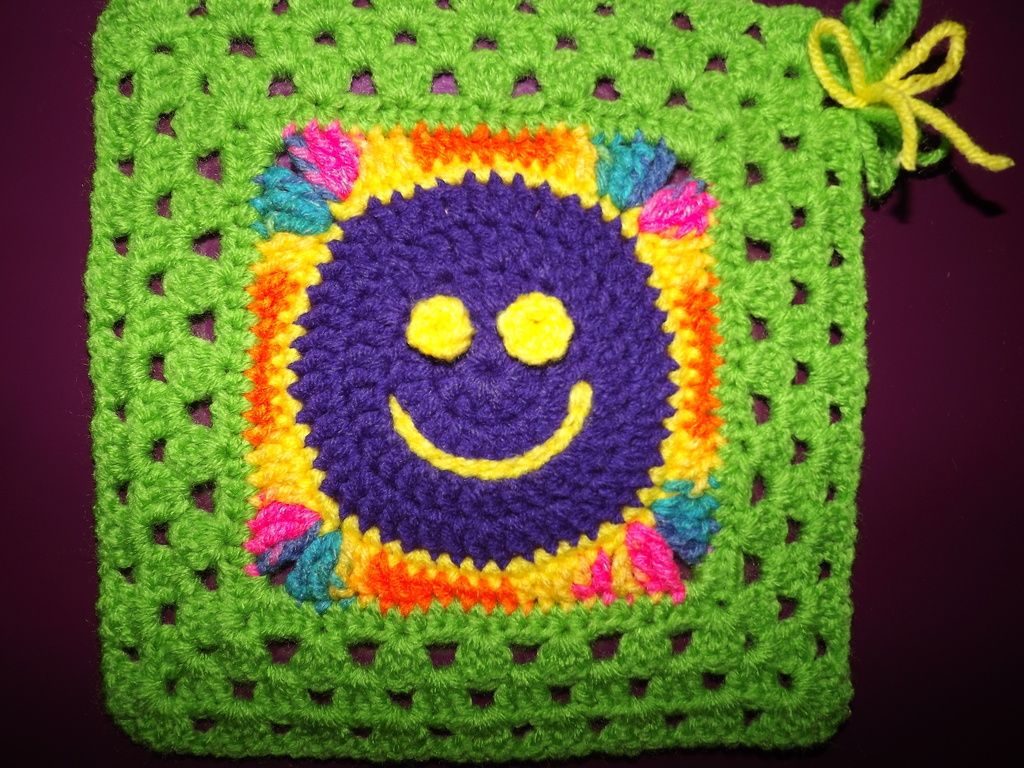 I call this one "Visions of a Safari".  Maybe it will provide the children with ideas of what it would be like to go out on a safari and see all different animals. 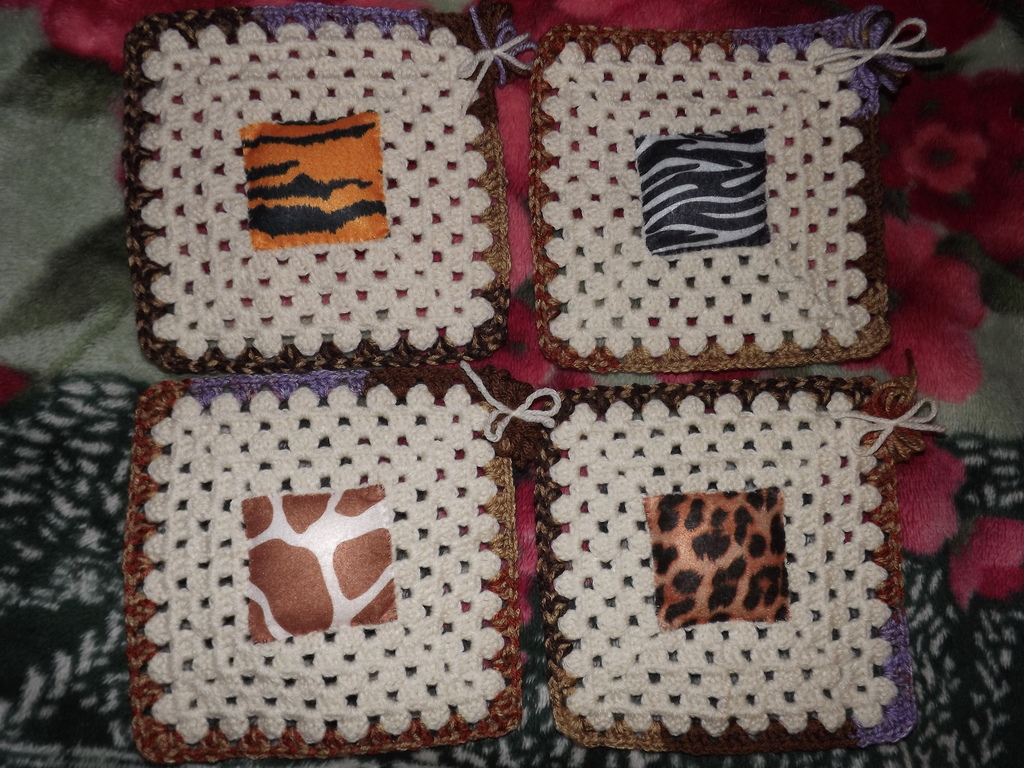 This Nelson Mandela quote is for Ronda and her S.A. team, and for all of the KASfolk who make squares

"There can be no keener revelation of a society's soul than the way in which it treats its children." - Nelson Mandela 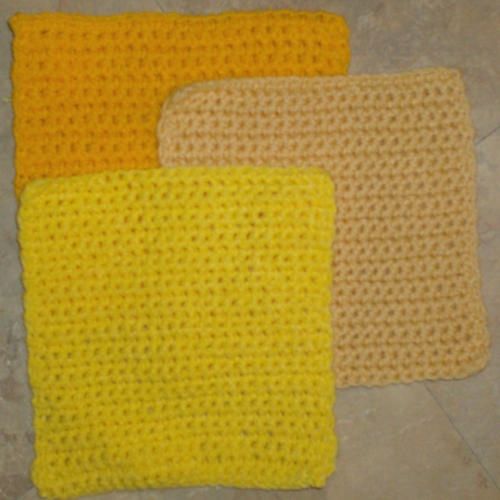